Looking for something easy to watch while my eyes recover from yet another trip to the ophthalmologist with even more bad news, I wanted something light and fun. I tend to get bored with TV series so I don’t even know why I found myself watching the pilot episode of Zoey’s Extraordinary Playlist. Then…

Zoey (Jane Levy) wakes up to loud music. Her Black neighbor was belting out a tune. For real. Thanks to Zoey’s headaches, she gets an MRI that results in a new magical power to hear the song in people’s hearts.

Cue an entire neighborhood doing a Bollywood- or West Side Story-style song and dance number to a Beatles number.

And the singing is NOT auto-tuned to death. I think I’m in love.

There are several People of Color in this story from the hunky crush Simon (John Clarence Stewart) to the hilarious and wise side-kick-slash-neighbor Moe (Alex Newell). While the latter trope is very tropey, so much that it can be dismissed as racist, I suspect the neighbor is going to have a significant role and s/he’s far from the only Black person.

Zoey and her boss Maggie (Mary Steebergen) are both women in the IT industry with a majority of men as coders. Actually, for most of the first season, they’re the only women in their workplace. The gender imbalance is pretty typical of the real world. And, based on my husband’s experience as a contractor, it’s not unusual for women to be in management.

One of the men – Leif (Michael Thomas Grant) a white geeky-looking guy – sings all about how he’s such a winner and everyone knows it and expects him to win the promotion he’s competing against Zoey for. IMDB even has some characters listed as Brogrammer and Brogrammer #2 (Jared Outten for both). So we have male entitlement even before we get to the friend-zoned Max (Skylar Astin) who, quite frankly, needs a good smack upside the head.

Zoey’s dad, Mitch (Peter Gallagher), has a degenerative illness that has, effectively, paralyzed him. The family talks about him like he’s not there while caring for him. It’s all about them not about him.

Then he gets up and does a song and dance number.

My reaction was both “typical! Disability for the nondisabled gaze!” and “um… this might be okay…” Then Zoey rushes to tell her mom and brother that Dad is still there inside. She insists they take him sailing. During the trip he manages – just – to reach out to his wife to connect, holding hands. It made a huge difference to all of them.

This representation of disability is mixed. Mitch has a dreadful haircut and pulls the weirdest face for someone who is, apparently, paralyzed. It seems these are visual reminders that he’s disabled (boo). At times he sings because Zoey’s superpower is hearing people’s heart songs. However, without actual representation of the disability community, this is cheap.

Why couldn’t they have cast, say, someone with cerebral palsy who uses a chair? Sure Mitch wouldn’t have been dancing on his feet but the representation could have been more real.

In some ways this is disability for the nondisabled gaze but also, I felt, a message to treat the “incapacitated” person as a human being not a meat package to be dealt with.

Apparently Austin Winsberg, the creator of Zoey’s Extraordinary Playlist, has experience of the same type of disability he gave Mitch. CarterMatt says:

“For those who do not know who Richard Winsberg is, the series is inspired in part by creator Austin Winsberg’s experiences with Richard, his father, who battled a similar disease to Peter Gallagher’s character on the show. He passed away back in 2011, and in an interview with the Star-Tribune, Austin spoke about how he was able to channel some of his sense of loss into his writing…

Originally Austin’s thought was to have his father-type character singing but that morphed into Zoey’s superpower.

As representation of disability, especially with the knowledge that real lived experience factors in to the story, I give this representation 4 out of 5 stars. If the disabled character had been played by a disabled actor – or if the series at least gave disabled actors and/or crew jobs – then the score would be higher.

Episode 2 was autotuned. The honeymoon period died a really quick death. It wasn’t so badly overdone that I quit, however.

In episode 3, Zoey invents software for disability access that already exists. Boo. They could have discovered the software instead. And Dad is reduced to being a burden again. Because disability exists only to make nondisabled people look fabulous.

Episode 4: although Mo’s gender is hinted at in previous episodes, in this episode Mo’s gender and religious bigotry vs spiritual acceptance come to the fore.

Mitch spends an episode crying. His family dismisses this as a side effect of his medication instead of due to loss and grief.

And so it goes, with a romantic triangle, entitled men fighting it out for the prize while Zoey, the prize, is trying to deal with her dying dad and change at work. Some brilliant episodes and some where representation of disability and gender issues leave a bit of a bad taste. Not so bad that I quit, however.

After watching one episode… well, I binged the series. Zoe’s Extraordinary Playlist is a fabulous balance of comedy, song-and-dance numbers, romance and social issues. The supersaturated color speaks to the brightness of the series but home life with dad is challenging. There’s something here for everyone. Not to mention some FABULOUS guests of the week.

I confess I’m a few episodes in to season 2 already. So far I’m impressed that they’ve managed to keep that balance working for another season. A word of warning, however, these “will they won’t they” storylines tend to lose me. I enjoyed Lois and Clarke but quit the season they were supposed to get married but things kept getting in the way. It was more predictable than the monster of the week. So, stay tuned to see how long I last!

If you enjoy Zoey’s Extraordinary Playlist and are into books, I highly recommend Techbitch. 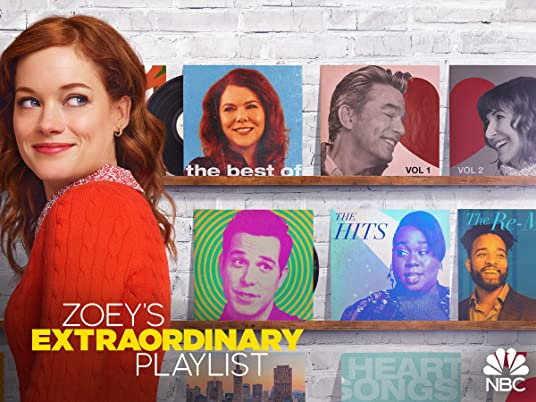