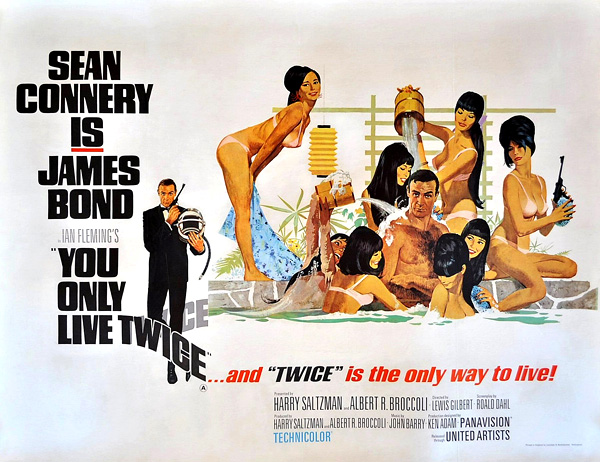 After four consecutive years and four solid films, the 007 producers decided to wait two years before releasing the fifth instalment in the franchise, You Only Live Twice. Does the wait pay off?

You Only Live Twice is when the fantastical elements begin to really shine in the 007 franchise. After a US spacecraft is hijacked mid-orbit by an unidentified shuttle, a meeting is called. The American government blames the Soviets for the hijacking while the British government believes the unidentified shuttle landed in the sea of Japan. The Americans and Soviets don’t believe the Japanese are involved, however, the British already have a man on the job.

It turns out that man is James Bond. After his death is faked and he is buried at sea, 007 is sent to Japan to find out where the unidentified shuttle landed before the next spacecraft is launched in orbit, or face the possibility of World War III. Of course, the MI6 agent has help in Japan while the usual groups are out to kill him including SPECTRE, the shadowy organisation that has plagued Bond since Dr No.

You Only Live Twice has one of the craziest plots in the franchise so far. SPECTRE is sending their own rockets into orbit to swallow space shuttles. The whole idea sounds stupid. No way would it even be possible, however, while watching the film, I was completely engrossed. The idea of SPECTRE trying to bring about World War III by playing Russians and Americans against each other is pretty smart.

James Bond spends the entire film in Japan after a brief start in Hong Kong. Japan has never looked better on film. Maybe it has something to do with all the countryside locations or the nighttime city filming. The photography is eye popping.

I mentioned SPECTRE is heavily involved in the plot. For the first time in the franchise, Blofeld plays a greater role. No longer is he hidden behind a wall or just off-camera. This time, he’s front and centre. Does the character live up to the hype? No, he doesn’t. I’ve never been a big fan of Blofeld, mainly because this was the first time I remember being introduced to the character. My greatest complaint is that, after four films, we find out that Blofeld is pretty much Dr Evil from the Austin Powers franchise. I know it was released 30 later but, unfortunately, when I think of Blofeld in You Only Live Twice, I can’t help but think, “sharks with friggin’ laser beams attached to their heads.” I’ll get more onto the casting of Blofeld shortly.

Sean Connery announced to the producers and public he had had enough of playing James Bond and was quitting the role after You Only Live Twice. Unfortunately, it comes across in the final film. Connery looks a little tired in some scenes and left me cringing, especially during the third act when facing off against Hans. He wasn’t phoning in his performance as much as he does in Diamonds Are Forever, but clearly he was tired of the role and beginning to let himself go by gaining a little extra weight. I honestly don’t mind the weight gain; I find he looks best in this film, aged and at his calmest.

I can’t blame the guy, but I just wish it wasn’t so noticeable during the film. Remember, I haven’t read any of the Ian Fleming novels, so what I’m about to say may not be the producers fault. Whose idea was it to turn James Bond Japanese in this film? The moment it came on screen, I couldn’t help but laugh at how absurd it looks. A new hair piece and eyes and suddenly James Bond looks like Spock. I laugh at it. I’m really surprised by how bad it looks and it carries on from act three until the credits roll.

The Japanese contact helping 007 is Tiger Tanaka as played by Tetsuro Tamba. I love this guy so much. He keeps making fun of Bond and calls Q’s gadgets toys. He has a great personality, constantly smiling on screen. He has an infectious laugh and many enjoyable scenes with Connery. He might also be one of the most misogynist characters in the franchise but you still gotta love the guy.

Aki is the main female lead here. I love her in the role and the way she plays off Connery. Her chemistry with him is top notch. The scene where Aki gives 007 a back massage, he genuinely looks excited to see her. I liked them together in the film and was sad when she was replaced during the third act by Kissy Suzuki. The less said about her and her bad acting, the better. It almost becomes painful to watch.

Helga Brandt is attractive but insane. She has red hair but so useless. She is the femme fatale of the piece but fails miserably. Twice she has the opportunity to kill Bond and twice she fails. The first time Bond charms his way into her pants and the second time she simply does what every villain does, going for a slow death. Just kill the man, it isn’t hard. Helga isn’t as interesting as Fiona Volpe from Thunderball and you can tell she is clearly meant to be similar but she isn’t used enough, which makes her character about as threatening as Blofeld’s cat. A problem with another character I’ll get to.

I don’t like Donald Pleasence as Blofeld. I understand it’s an iconic reveal and inspired Dr Evil. Big deal. I much prefer a later incarnation of Blofeld. Donald Pleasence is too weak and not at all imposing. His evilness seems so forced in this film. At no point would I ever be frightened by his character. Place me in a room with Dr No and I’m trading in all my secrets but with Blofeld, I think I’d just laugh in his face. I don’t understand the love for this portrayal of Blofeld but I guess is the reveal in a Sean Connery film. I’m not a fan at all.

There is some really good directing by Lewis Gilbert and, thankfully, he will returns for a second time later on in the franchise. Some of the shots and the way he films the action scenes really put you in the zone. We’re looking at some of the best locations, everything looks so lush, but what really stands out is the fully operational SPECTRE base hidden within a volcano. Production designer Ken Adams receives special mention. At the cost of $1 million, he managed to turn Pinewood Studios into the volcano base we see on screen, including a working monorail and helicopter landing pad. Some things just look better when created on set over digital effects, not that digital effects were an option in 1967.

Another standout part of You Only Live Twice is the fantastic musical score by John Barry. I purchased the soundtrack and continue to listen to it over most others. Barry’s music emotes such tension at the beginning of the film when the SPECTRE rocket approaches and eventually swallows the American shuttle. Pure brilliance. Any track off the CD is memorable and worth the full price I paid.

The Blu Ray picture quality: so far, all the 007 films have all look so crisp and clear. The image quality of all films have been restored to remove dust and dirt from each frame. Particular attention has gone into digitally fixing cracked images found in older films. 99% of You Only Live Twice the picture was infallible but, in two scenes, the picture looked on par with VHS. I was shocked.

My thoughts on You Only Live Twice are mixed. I acknowledge its faults. I don’t like Blofeld and find the femme fatale is pointless. Only Aki is enjoyable when it comes to the Bond girls and Connery looks a little tired at times. But I can’t help but enjoy it.

I know it has problems, especially when turning Japanese, yet I still enjoy it. Maybe it’s got to do with my first viewing of the film. Whatever the case, I had a lot of fun watching You Only Live Twice over the past month. It slows down slightly leading up to the third act but the film goes out with an explosive finish.

Not as good as it was years ago, but I can still enjoy it enough.

Sean Connery will not, but James Bond will return in On Her Majesty’s Secret Service