Yesterday is history is a young adult queer romance crossed with the time travel story. It’s very much feels like a young adult version of the Time Traveler’s Wife, which is even mentioned in this book. But they only mention the MOVIE, never the BOOK. (To be honest, I’ve never seen the movie. I think it’d be a huge disappointment after the book.)

Andre is a 17-year-old black boy living in Boston. He had cancer of the liver and now has had a liver transplant. He’s trying to pick up the pieces of his life, to graduate high school, and has plans to go on to become a doctor.

Then, shortly after the liver transplant, Andre time shifts for the first time. He travels back in time to 1969 to his own house and meets the boy who lives there then.

This boy is Michael Gray, a gay man coming out in an era that was a lot less tolerant than present-day Boston.

Andre is drawn to Michael, to his passion, to his love of the arts, and to his mystery.

The family of the boy who died that donated Andre’s new liver get in touch. They’re incredibly wealthy and powerful so confidentiality regarding organ donation wasn’t an issue for them.

And their surviving son is a hot young asshat of a guy named Blake.

In many ways Yesterday is History could have been set in the same universe as the Time Traveler’s Wife if it wasn’t for the nod to the story and the fact that, in this novel, people time travel with their clothes. And, to a point at least, these people control their time travel.

Jackson delves into the time travel trope well, comparing then and now astutely without dwelling. Observations are pertinent to character development or plot.

However, I believe that travelling fully clothed – apparently including one’s watch and, by implication, one’s PHONE – then returning to check the time you were gone BY LOOKING AT SAID WATCH appears to be a bit of a hole. Nothing relevant to the actual plot, which is great, but a small niggle.

Another time traveler has a scrapbook of photos of herself in various time zones. No mention of how those photos were obtained. Were they selfies? Perhaps taken BY A PHONE? In, for example, THE NINETEENTH CENTURY? My nerdiness is showing but I felt that this issue should have been explored in at least a line or two. Like, for example, Andre commenting on the selfies as opposed to photos, or asking how the photos were taken – and aged through time. Mostly not related to plot, but a niggle.

And I confess to being a life-long lover of time travel stories, after watching Doctor Who from behind my uncle’s chair when I was a little tacker. So I tend to worry at little things like that.

Andre had cancer of the liver, surgery, no apparent chemotherapy and a full recovery after a liver transplant. Also he partaketh of the alcohol during his recovery phase. It was kind of understandable at first, during the first jump at least but, as a previous non-drinker, this seemed out of character. And very dangerous.

Someone else suffers ill effects from a few years of heavy drinking but that seems only temporary. Not that I wanted a depressing outcome – I like the overall character and story arcs in Yesterday is History – but if you’re going to run with scissors you’re going to get hurt. Avoiding the consequences “because plot” teaches readers that it’s ok to run with scissors. In my opinion.

Yesterday is History was written by a man of color with a protagonist of color. At times Andre is touchy about race and Blackness and yet sometimes “people like you” means “gay people”, which is something he willingly embraces.

Racial issues are distinct from issues of class. I love how one character comments that all private schools in Boston are populated by privileged people, and competing over nuanced entitlements is silly. And yet Blake’s family is stupidly rich, from old money with professional parents making a killing. Which feeds in to Blake being an entitled ass.

Jackson blends a dash of humor in to his social issues while never lecturing. I’m here for that.

Yesterday is History is a kick-ass queer Young Adult romance with a much more satisfying ending than The Time Traveler’s Wife although they are practically sister-brother books. I highly recommend! 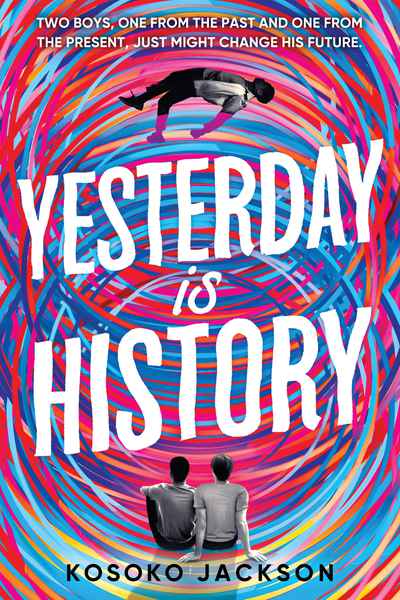