Wonder Woman has been a feminist icon for over half a century. The first Wonder Woman movie with a woman director, Patty Jenkens in 2017, was a triumph. In my opinion, that movie ties with Black Panther (2018) for the best superhero movie of all time. After women nearly single-handedly rebooted the superhero franchise while putting a woman superhero stratospherically high in box office rankings, DC looked at a sequel. And, of course, they decided A MAN should direct the sequel. There were also rumors that the sequel would be about Wonder Woman’s brother because women can’t have nice things.

However, fans told DC exactly what they thought about that.

So we’re getting a sequel that focuses on women and is directed by genius Patty Jenkens. YAY!

Diana Prince is working at the Smithsonian in 1984, so cue nostalgia. And I’m hoping for a good soundtrack. She meets a colleague on her first day, Barbara Minerva. Both feel isolated, both have a lot in common, so they hit it off. Then the FBI give Barbara a wishing stone to identify. Nothing could possibly go wrong, right? Right??

WW84 is a novella version of the movie without the final super-fight. It’s much shorter than I expected, with descriptions reduced to a minimum. It’s almost like this is the text that precedes the graphic novel. However, the size and language make this novel excellent for the targeted readers, in upper primary and high school, as well as reluctant readers and fans who want a sneak peak of the movie.

WW84 has eight pages of glossy pics from the movie. Don’t peek until you’re at least half-way through the book or they’ll spoil the story.

I adore Wonder Woman (2017) and I’m looking forward to the sequel. Missing the end of the story is disappointing, though, so WW84 seems to be advertising that you pay for. However, it’s a must for collectors. I believe the book is out now and the movie has been delayed until October 2020. 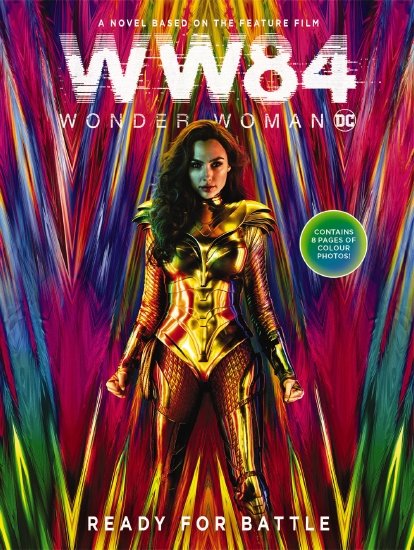