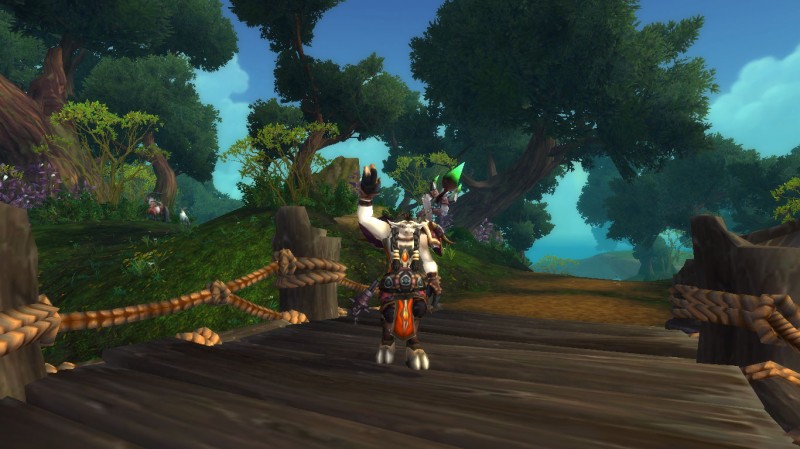 It was recommended that I should write out some of the adventures and discoveries I have in World of Warcraft. I feel like the best place to start is by giving a bit of my playing history.

Okay, the title might be a little bit overdramatic. I played World of Warcraft a LOT for several years. Any time I didn’t have other commitments, I would play WoW. Not long after the Cataclysm expansion came out, my interest in the game waned and I just decided I didn’t want to play anymore. Just like that, I stopped playing.

With the release of Warlords of Draenor many of my friends had started playing again. Some had quit well before Wrath of the Lich King and some had never played before. Some had never stopped. Finally and after several reminiscent conversations, I downloaded the free ten day trial. Blizzard upgraded my account so it was current and included the Mists of Pandaria expansion that I had missed. I was all set to travel to Draenor and fight alongside my fellow Hordites.

Instead, I decided to start anew on an Oceanic server because it has a lower latency (lag) than playing on a US server from Australia. As I thought I wouldn’t be playing for more than a week or so, I wanted to ensure the game time I did have was as enjoyable and lag-free as possible.

I’ve always loved casters. Mage, warlock, priest, elemental shaman have all been my ‘main’ characters at one point or another. So I rolled a new blood elf priest. Heals, more heals and deeps — oh, my!

Now, I must admit to you, dear reader, I have always had a bit of a weakness for vanity pets. They followed you around looking so adorable and … um … not a lot else. But now? They are basically tiny Pokémon! You can battle with them against other pets, level them and catch them in the wild. It is a lot of fun. I have been dabbling in raising the pets, but as of this article being written the highest level pet I have is 15. The maximum pet level is 25.

I played the free trial for its full term then upgraded to the full version of the game.

When you purchase the Warlord of Draenor expansion pack, you get a free instant level 90 character (RRP US$66). This time I thought long and hard about what to do. I didn’t want to waste this opportunity. Discussions were had, plans were made. I did not want to ‘waste’ the insta-level on a character I would have fun levelling up to 90 like the priest I had made.

That’s where this introduction must draw to a conclusion but pull up a chair and stick around. The adventures have only just begun. After all, who doesn’t want to read about the adventures of a level 90 flappy bummed cow-chook?