Marisol is half-American and half-Bolivian but lives in Bolivia with regular visits to LA, where her Nana lived. Now the extended family is assembling at Nana’s house to pack it up to put it on the market. She and her cousin, Jake, are grieving. They take the family boat, a dinghy I believe, to the lighthouse to look for Nana’s treasure. There they travel to the World Between Blinks.

This world is part Emily Rodda’s Finders Keepers and part Where In The (Quasi-Mythical and Historical) World is Carmen Sandiego. Marisol and Jake chase after the villain who brought them there and tricked them into stealing a book.

The chase takes them to diverse places like Nefertiti’s palace that includes the Amber Room (from a Russian palace), underwater, and flying with Amelia Earhart.

Marisol appears to be your average white person except for speaking Spanish at times through the book, most of which is not translated for readers. On the one hand, I hope Latinas see themselves.

However, Marvel’s Runaways included a Latina character who seemed mostly “average white girl” apart from being portrayed by an actual Latina. Except when she grieved because she was going to miss her Quinceañera. And when she went to live with an actual living Latina relative. Her family of choice held the celebration for her, along with explanations. It was beautiful! The World Between Blinks wasn’t sufficiently long to include something similar and yet I felt it needed something.

The use of Spanish feels somewhat forced, especially when characters have a TARDIS-like ability to understand other languages and readers don’t. Translations in footnotes at least would have been helpful. At times I only had the vaguest impression of what was being said. And, because PAPER BOOK, there was no easy link to a translation.

Marisol and Jake grieve for their Nana and, during this process, the story delves into the plot-relevant trope of losing memories as a means of avoiding pain. This is handled beautifully, encouraging children to experience pain as part of life and love.

However, characters with lost memories and are, effectively, disabled. Then they fully regain their memories at the end. Thus Kaufman and Graudin use disability as a lens for nondisabled people with a magical cure for disability at the end. In my opinion, this “neat” ending undermined the message of grieving losses as well as reinforcing existing unhelpful disability tropes.

Overall, the World Between Blinks is a fun children’s story combining Finders Keepers by Emily Rodda and Where In The World Is Carmen Santiago. Facts are scattered throughout the story, enabling its use as a teaching tool. Quite often melding of fact and fiction is a cause for concern regarding teaching. But in this story the authors continually remind readers that this world is a minestrone of historical and quasi-mythical artefacts.

Read The World Between Blinks if you enjoyed Starfell: Willow Moss and the Forgotten Tale by Dominique Valente (darkmatterzine.com). 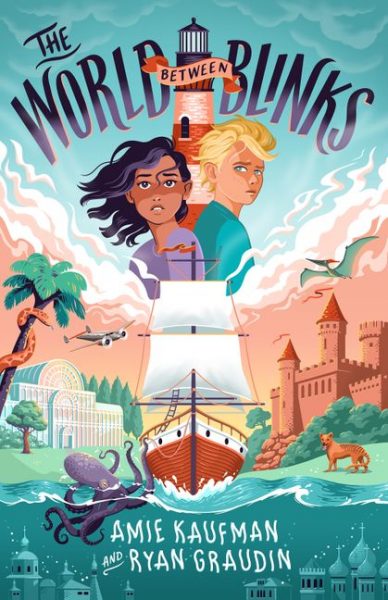