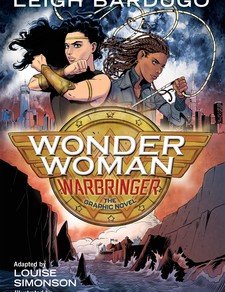 A young Wonder Woman is living on Themyscira trying to live up to her mother’s expectations and trying to overcome others’. She enters a race but sacrifices winning to break the rules and rescue a shipwrecked girl, Alia. There’s a reason for the rules: the island suffers natural disasters while Amazons start falling ill. Diana decides to ignore sage advice to try to beat the odds to save everyone.

Diana and Alia flee the island in an attempt to find and bathe in a magic spring but the magic goes awry, landing them in New York instead of Greece. Then things get complicated.

Alia is the Warbringer, a hereditary superpower that can destroy the world.

After reading Bardugo’s Ninth House, I will read anything and everything by Bardugo. Therefore this story, even in graphic novel format, was a must. Due to my vision impairment, pictures and small text featured in this graphic novel are not my forte. I realized rather too late that the same story is available in a novel format, which would have been easier to follow. However, I enjoyed the story even though the format was a struggle.

Bardugo’s representation of gender and race is enlightened. Wonder Woman is no Miss Peregrine’s Home for Peculiar Children (with the lone black character as the villain). And the women aren’t fragile flowers waiting for their prince to rescue them. This kick-ass women rock.

I won’t say any more because SPOILERS.

Diana is a teenager in this graphic novel, still developing as a person but coming into her own. She’s an excellent role model for the usual young adult and even primary school audience. Adults of all ages who enjoy superhero stories will enjoy this story too.

Wonder Woman: Warbringer rocks. It’s not consistent with the movie – in the movie, Wonder Woman is Ares’s daughter – but this graphic novel has the same attitude, the same strengths, as the movie. I recommend this graphic novel although next time I’ll take a novel with words over pictures or, better yet, an audiobook. Preferably read by Jordan.

(In Australia, Wonder Woman Warbringer is published and/or distributed by Penguin.)