Wonder Woman: Tempest Tossed is a full-color graphic novel with a substantial origin story. Diana is a teenager with all that entails, which is all alien to the Amazons who never went through puberty. Their healers treat Diana as a medical curiosity, much to her chagrin. She believes she’ll be “cured” of puberty on her 16th “born day” but disaster strikes.

The barrier protecting her home island, Themyscira, fails, allowing refugees to wash ashore. The Amazons want to push them out to sea where they’ll drown. Outraged, Diana dives into the sea to rescue drowning children, only to be lost at sea herself. She washes up at a refugee camp so joins their huddled masses.

I admit to a significant degree of pedantry and an (arguably) unreasonable demand for consistency in storytelling. In the 90s I stopped reading Star Trek novels after I read two in a row that contradicted one another regarding science: one allowed a warp drive in a planet’s gravitational field and the other didn’t. I mentally hurled the second book against a wall, returned it to the library, and sought out alternative reads.

Also, I hadn’t watched a Spiderman origin story between Toby McGuire’s and Tom Holland’s. In the end I watched Tom Holland’s movie because the minion who does ALL THE PODCAST EDITING wanted to watch it and the advert looked fun. I mean, how many times is Hollywood going to re-tell the same damn story??? (Also I admit that I might have watched the Andrew Garfield movies if I hadn’t thought Spidey was played by Hayden Christensen. Christensen does sulky well in Life as a House but Anakin in Star Wars put me off forever. I’m vision impaired and the two actors look too much alike.)

So you’d expect that I’d be somewhat annoyed by Wonder Woman getting yet another origin story. And Leigh Bardugo’s Wonder Woman Warbringer was another teenage WW origin story, which I reviewed quite recently.

Am I tired of Wonder Woman? Apparently not. I LOVE THIS GRAPHIC NOVEL. Rarely – if ever – have I felt so passionate about any graphic novel.

What’s not to love?

Anderson reimagined Diana Prince’s origin story again. This is what, the 3rd or 4th version I’ve “consumed” in the last two years? And I’m not even a Wonder Woman fan. So yet another origin story.

But Anderson does it so well! Her Diana is consistent with who Wonder Woman has (nearly) always been, she just leaves Themyscira as a 16 year old, accidentally, while saving lives.

Living in a refugee camp, another refugee woman warns Diana that the guards are a threat to a pretty girl although the story is kept PG. Diana meets UN workers who help her move to America to study. Suddenly her impressive knowledge of languages, philosophy and ancient culture is contrasted with her obliviousness to contemporary culture and ignorance of technology, euphemisms, slang and more.

Pitting Diana against and with another teenager from an immigrant family exposes her to comedic and realistic cultural clashes. We also see the world from “alien” eyes, like the new-kid-at-school perspective.

Wonder Woman always stood for justice and compassion (see Tights and Tiaras for a hint on academia’s view of Wonder Woman), but never more so in Patty Jenkins’s movie. Likewise in Tempest Tossed, Diana fights to protect the vulnerable except here she isn’t facing down Nazis in the front lines. Here she’s facing down racism, willingness to allow innocent children refugees to die, child slavery and more. Wonder Woman: Tempest Tossed is the Wonder Woman version of every award-winning Zana Fraillon book. And if you’ve followed me for any length of time, you know I love and adore everything I’ve read of Fraillon’s.

Diana’s foster-sister is passionate about politics and social issues. She wears and lends Diana clothes with political slogans that are well worth reading. Normally I wouldn’t even notice these details but the illustrations are excellent, leaving nothing to chance. Noticing this, I took the time and increased magnification to read the slogans.

Diana and co even visit the Statue of Liberty and discuss US citizenship and the oath new citizens take, because a friend of Diana’s foster-family is working towards citizenship. Even the Statue’s plaque is inspirational.

The full-color illustrations are excellent, conveying so much so elegantly. I often struggle to read graphic novels due to my vision impairment. However, Duca’s illustrations fit well under my desktop magnifier, paper quality is good and isn’t too shiny so reflected light wasn’t too much of a problem. The illustrations are vibrant and easy to parse.

And they add to the story, an elegant substitute for descriptions that would have been necessary in a novel format. Although this novel is fairly short, there is sufficient story substance for a satisfying read.

2020 may be shit in a lot of ways due to the pandemic, politics, fires and more, but 2020 is the Year of Excellent Books.

Wonder Woman: Tempest Tossed is an excellent story about a young woman stepping up to save lives, doing all she can to help. Diana Prince is an inspirational role model for other young women, as is her friend. This novel is an exciting iso-read for book club discussions or even high school literature and social studies classes.

Note: there are repeated pages in the edition I reviewed. However, I believe the story is complete, just with repeated pages in one section. A bonus feature after the Wonder Woman story is the opening chapter of another graphic novel featuring a coming-of-age coming-out superhero story that I’d love to read!

Read this if you loved The Ones That Disappeared and Lost Soul Atlas. 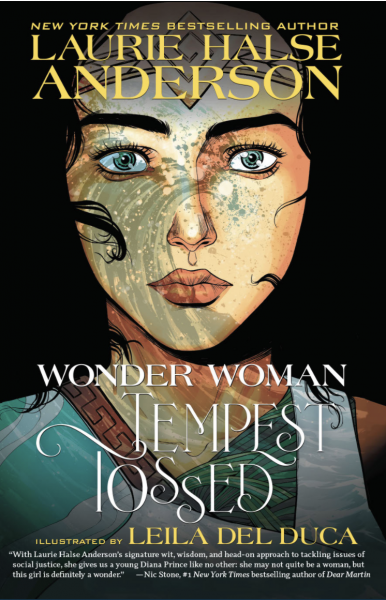