Update: when I initially wrote this blog, every image was linked to the appropriate artist so readers could look at their larger collections and even purchase the artwork where possible. Sadly, some of the links have broken; if you can help track down these talented artists, I’d appreciate it!

If you’ve followed my writing for any length of time you will have noticed I occasionally bitch about the scarcity of decent armour for women, but today I’m celebrating artwork of women in various classes of armour. I read an article at A Dribble of Ink called “‘We Have Always Fought’: Challenging the ‘Women, Cattle and Slaves’ Narrative” by Kameron Hurley. Kameron’s interesting essay was illustrated, inspiring my blog today.

This was the first image that I really looked at: S. Ross Browne’s Huntress. She doesn’t look like a huntress to me, more of a warrior. Call it what you will: the subject is a beautiful woman wearing sensible plate mail: no boob-plates!

Brenoch Adams‘s young woman’s hair is tied back in a plait to keep it out of her face. She’s dressed warmly, ready for hard travel. After lowering her goggles you see our heroine’s face dirtied around their outline. Comfortably holding a powerful weapon, her accessories include an ammunition belt. One leg is missing, replaced by a cybernetic prosthetic, our heroine soldiers on.

Michael Komarck‘s magic users in cloth armour are dynamic, posed similarly to male warriors painted by the same artist. The women’s physiques could be based on real athletes. No boob windows or plunging necklines detract from the power of these fearsome fighters.

For those who think it’s strange I refer to dresses as cloth armour, cloth is traditional for magic users in games. Even male magic users tend to wear cloth dresses. (Art for the Magic: The Gathering TCG, Shards of Alara expansion, by Michael Komarck ©2008 wizards of the coast)

Paradise, i am coming… by Kimonas

Kimonas discusses the creation process, saying, ‘…I tried to render the face stocky to make her look like she could handle a fight…’ Wearing armour referencing deep sea diving gear, she’s dressed the equal of any man. Slogging it out through rough terrain, she looks tired but her goal-oriented focus will carry her through.

This grubby little rebel might not have the most practical hair cut but she’s fit and feisty. Carrying supplies and weaponry while moving quietly through the jungle, she’s alert to every noise. Storm troopers beware! 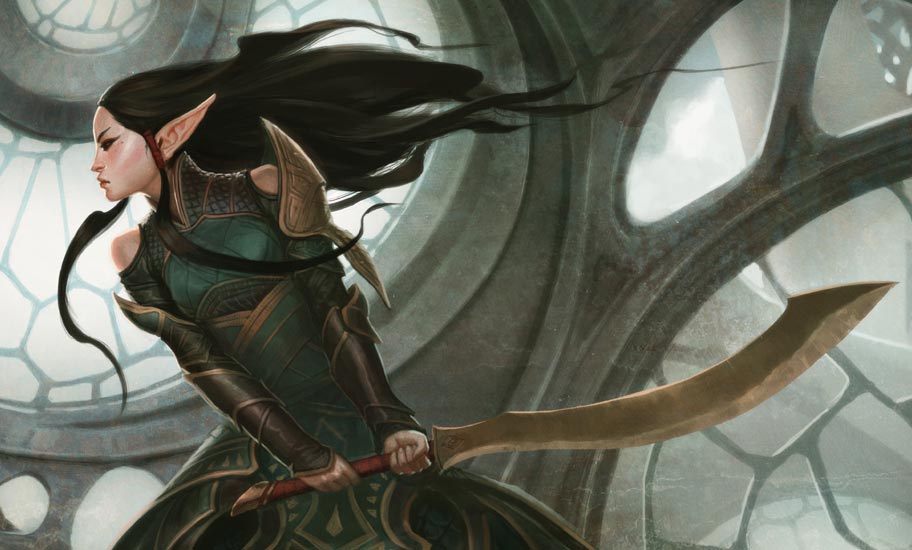 I never thought I’d include World of Warcraft art in an article like this, but here it is: Hushblade is not exploitative! Notice the realistically-sized breasts, the high neckline and fearsome attack. Kudos!

I must add this link: ‘It’s Time to Retire “Boob Plate” Armor. Because It Would Kill You‘ if for no other reason than I want to be able to find this link later to THROW IT AT PEOPLE.