Gwen is Wolf Girl: she can understand wolves, dogs and possibly some other animals. Gwen and Rupert are looking for their parents whom they carelessly lost during an invasion of their country. A dire wolf (a wolf as tall as Gwen), called Sunrise, and two dogs comprise the rest of their “pack” (family-of-choice).

Gwen acquires her mother’s scarf. When she asks Sunrise the dire wolf if she can track Gwen’s mum, Sunrise reacts. Then, overnight, Sunrise decamps, abandoning her pack, becoming a traitor.

They follow Sunrise hopping for a reunion but, at the least, hoping to find Gwen’s mother. However, instead they find snakes (Snakes? Why’d it have to be snakes?) and an enemy installation.

Danger lurks at every turn…

This is the first Wolf Girl story I’ve read, and it’s book 4. Although it’s possible to pick up this series part-way through, it is definitely better to read the series from the beginning.

Based on this being the first book I’ve read, I’m not sure if the story is set in a specific country, a fictional country or a historical/alternative history country. My best guess is that it’s like Tomorrow When The War Began but for primary schoolers, meaning it’s the English-speaking country of your choice (unless otherwise specified in earlier books), invaded by another country.

From what I could tell, it could be Australia invaded by the US on the basis of current legislation before Australian parliament right now. But this series was already at book 3 before that legislation reached parliament. And this is a novel aimed at primary school kids.

So let’s assume it’s not intended to be political commentary of any kind. Let’s just assume this story is an exciting story for younglings. A story that doesn’t involve green 50-year-olds in floating prams. Okay?

It’s hard to judge representation beyond the bleeding obvious: the two central characters are a boy and a girl although the girl is both titular and more kick-ass.

Of the three four-legged family members (a wolf and 2 dogs), 2 seem to be male and one female. The most kick-ass and complex of the furry friends is Sunrise, who seems female.

The pictures could imply the girl is like Anh Do – an immigrant from an Asian country – or she could just be a brunette.

The picture revealed by this one instalment of Wolf Girl is that Anh Do, a celebrated Australian artist and comedian, and the “Happiest Refugee”, is also a champion of diversity and inclusion in all its forms.

There are no disabled people in this installment of Wolf Girl. With so few characters, that’s kinda ok.

However, this novel is a word book NOT a picture book. And yet the story occasionally relies on pictures to tell the story. One example is “The other wolves surged towards us – but I was ready! Perhaps that would delay them but it wouldn’t work for long” (pp. 158-159). There is no textual interpretation of the image. I read the text a couple of times then spent a minute looking at the picture to figure it out.

This novel is a racy plot from start to finish with elements of humor, particularly from the dogs’ (wolf’s) dialogues. My only criticism is that the novel does not provide textual interpretation of pictures, not even when pictures are explaining a plot point. This excludes a certain class of (disabled and/or possibly neurodiverse) readers. Wolf Girl 4: The Traitor is Jurassic Park crossed with Tomorrow When The War Began but for primary school children.

I highly recommend it for primary school children. 4 out of 5 stars.

Read this if you enjoyed Art Time! by Anh Do. 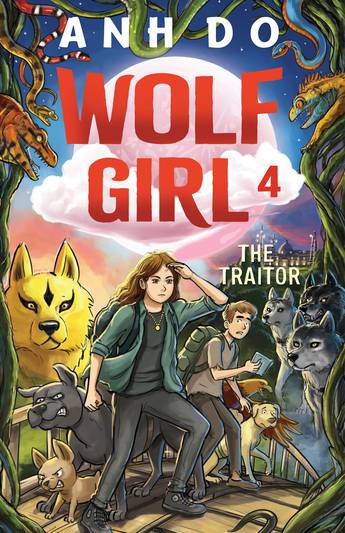