Two guys sit in a tent. It looks like they’re supposed to be hunting and it’s a sort of hide. One of them is eating a meat roll and starts to fart. AND FART. The other goes for a walk to escape THE STENCH. When he returns, the other guy TURNED. And ate him. Or fucked him. Not quite sure which from the leg action. (Ate. I’m pretty sure.) Turns out, stinky guy’s family was in witness protection. And it’s just become Witness Infection.

Cut to a dog grooming parlor or a veterinarian’s (not quite sure which). Cue dialogue that’s a cross between Seinfeld, Friends and the Godfather.

Anyhoo, Carlo’s (Robert Belushi) dad (Carlos Alazraqui – don’t ask me how they called the son the actor-father’s name more or less) tells Carlo he has to marry his brother’s girlfriend and get her pregnant because his brother Dominic (Bret Ernst) is shooting blanks (too many steroids) and the girlfriend’s father will murder the entire family if he doesn’t. Because that family is also in witness protection. Or witness infection. Whatever.

This is zombie schlock horror comedy (comedy being the dominant genre). I’m not sure what to think about the Italian gangster trope: are Italians a minority? Italian-American lore laid down in the Godfather underpins this movie to great effect, even for me who’s never actually

never actually watched the Godfather. It’s such a significant movie I figure I know enough about it without sitting through the series.

(Leans back and talks at normal volume.)

Sorry. No spoilers. Just watch it.

Witness Infection knows what it is – a cheesy horror-comedy – and creators and actors obviously love their creation. Writers Carlos Alazraqui and Jill-Michele Melean have an obvious love all the stories in this genre-bending movie. And both previously wrote zombie comedies. Actors chew scenery in the best tradition of Doctor Who, Z Nation and Robert de Niro in, for example, Stardust.

However. A word of warning.

Because they love their genre, DO NOT play drinking games.

Do NOT drink every time you notice a reference to another movie or novel.

Even if it’s the Godfather. There are so many Godfather references that drinking alcohol at every one would put you in hospital. Drinking caffeine would leave you vibrating like the Flash.

Witness Infection is a hilarious zombie comedy in the style of Shaun of the Dead and Z Nation with more than a little Santa Clara Diet. Fan service abounds, even in the various styles of makeup: some zombies look like they’re from one horror movie while others look suspiciously like, perhaps, the makeup is also referencing another horror movie. This is not a movie for the weak of stomach or if you don’t like zombie movies. But if you love Z Nation, you’ll love this movie.

Watch this if you loved Pride and Prejudice and Zombies but would be happy to trade Literary references for Godfather references. 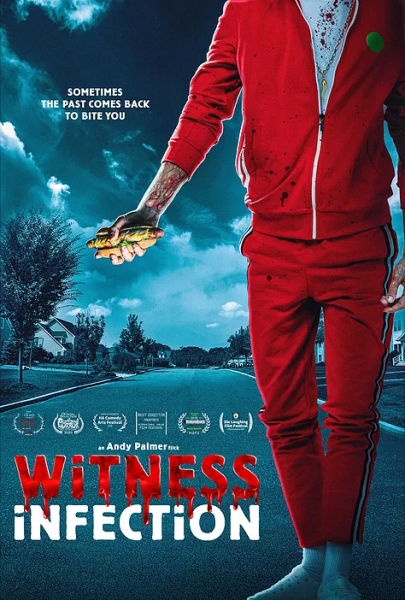