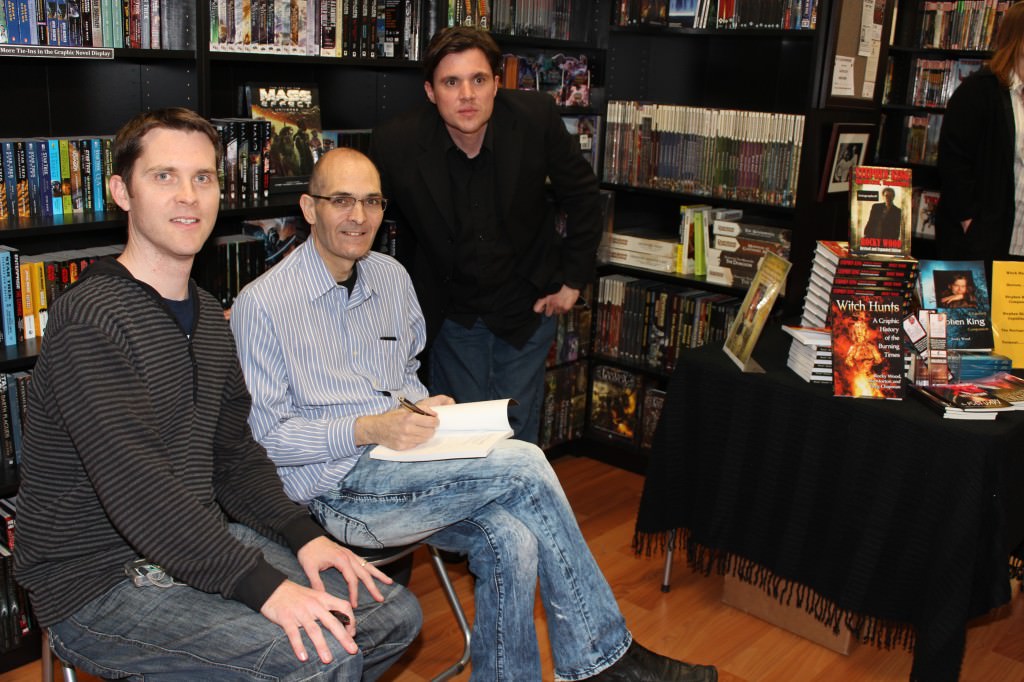 Greg Chapman, Rocky Wood and friend with books at the launch

Chuck McKenzie, owner manager of Notions, launched Witch Hunts on behalf of Rocky: his speech is below.

UPDATE: Rocky’s speech as read by Chuck is as follows (reprinted with permission):

Thanks everyone for coming. I’m sorry that the impact of Motor Neurone Disease means I can no longer speak publicly, so I get to rest while this is read for me!

‘Witch Hunts’ is a book with an interesting start in life. A couple of years ago McFarland, a fine niche publisher in the US who specialize in non-fiction, and I were talking about a Stephen King book, which ultimately came out last year – ‘Stephen King: A Literary Companion’ and won the Bram Stoker Award, so I am pretty proud of that.

McFarland asked me if I would write a graphic novel – to which my response was something like I don’t write fiction and I can’t draw, so why would you ask me? They said they liked my factual style and thought there was a niche for fact based graphic novels. So, against my qualms I talked the fine Maine artist Glenn Chadbourne into illustrating a book that re-imagines what happened to the greats of 19th Century horror – Shelley, Poe and Stoker among them in ‘Horrors!’, which garnered an Award nomination or two. All that proves is as a writer you can and should challenge yourself, and I now find myself writing Award nomination fiction after 35 years as a professional non-fiction writer.

When McFarland asked for another graphic novel I wanted very much to promote some Australian talent. Asking around the Australian horror community one name kept coming up – Greg Chapman and once I saw his work and understood his work ethic he was an easy choice.

I am glad Greg can join us today for this signing. You will see in the book he is a fine illustrator, with great attention to historic detail. As well as bringing out the true horror that is the awful period in our history when we humiliated, tortured, burned and hanged women (and some men) for reasons that had almost nothing to do with so-called witchcraft.

But of course you have to read the book to learn all about that! Greg is also a fine writer – an unusual combination, and his growing body of work promises a very interesting career in horror. And he was a joy to work with – nothing was ever too much trouble – and if you know Lisa Morton and I, we are nothing if not perfectionists.

A quick note on Lisa

A quick note on Lisa – she originally came on board to support me if my health failed and contribute her own take on the witch hunt phenomenon – well, she delivered in spades (or is it broomsticks?). The chapter on King James alone is worth the price of admission. Lisa is my Vice President at the Horror Writers Association, perhaps the hardest working colleague I have ever had in any endeavour and a fine writer, one whose mainstream breakthrough can’t be that far away. Not to mention she is THE world’s expert on Halloween!

So, again thank you all for coming, to Chuck for throwing this extravaganza, and to Greg for flying all the way from sunny Rockhampton to the depths of a Melbourne winter!