Emmeline is a 15 year old girl living in a walled settlement in the middle of nowhere, eking out an existence under the oppressive eyes of the Council while dreaming of exploration and discovery.

‘The middle of nowhere’ is another world, either far-future dystopian or an alternate-reality fantasy. Emmeline’s town is spilt into 4 quarters.

Because 3 quarters is not a whole, can you?

This is a patriarchal society that expects women to be demure and submit while even the men’s behaviour is circumscribed. Punishment for transgressions ranges from night shift on guard duty for missing settlement meetings to death for any transgression deemed to be a danger to the settlement. Execution is for anything from wandering too far from the walls to hoarding food.

Emmeline wants their lives to be better and believes they need to expand their explorations to improve their lot. She dreams of other people and other places.

Kane is a sexy half-French half-First Peoples boy; he starts to notice Emmeline and follow her around.

The Council brethren also watch Emmeline and follow her.

Although I can’t pass judgement on appropriation of other minorities, I thought Boorman does an excellent job of representing all Canada’s people groups and the inter-people politics in Winterkill.

The sense of place is excellent, too, with Emmeline’s world gradually expanding and La Prise, the Winterkill (a death-dealing wind heralding freezing winter weather), looming ever nearer.

Emmeline’s foot was crushed in an accident when she was a child. It’s never healed properly, causing her pain and difficulty getting around. Emmeline and some others see this as an outward aspect of her Stain, caused by her grandmother violating settlement law and propositioning a married man. In spite of her pain and the culture that shaped her, Emmeline is a kick-ass chick, just not the kind that usually kicks ass. Boorman’s exploration of disability through Emmeline is thoughtful, considered and constructive. Can I get a “HELL YEAH” for a protagonist with a disability?

At the peak of Winterkill‘s climax some characters crossed the line separating drama from melodrama. There were a few points that seemed a little ‘because PLOT’ but, overall, I thought the story was well-conceived and well-executed.

The love triangle is suitably confusing and yet is resolved, giving a satisfactory ending to the story as well.

However, I was surprised that neither of Emmeline’s love interests is concerned about Tom, her childhood friend and bestie who’s gay. Tom goes to great lengths to hide his sexual preferences because being gay is punishable by death. In fact, Tom and Emmeline made a pact to pretend to court and, possibly, to marry to satisfy their families and the settlement. A few times nothing is said when, according to their culture, Tom and Emmeline’s behaviour together should only have been acceptable if they were the same gender.

Winterkill is mostly Shyamalan’s The Village with a good chunk of John Wyndham’s The Chrysalids. Overall, Winterkill is an entertaining read with added depth due to exploration of social politics, people groups and disability in a coming of age story. I highly recommend it. 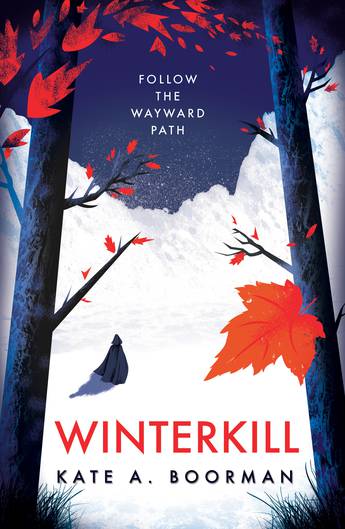