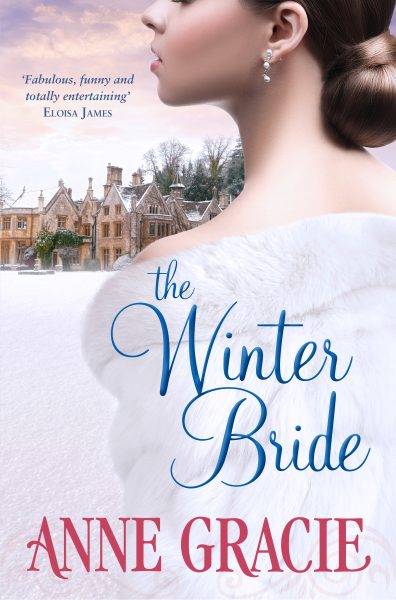 A romantic family tree begins with Jane Austen before branching through generations including Georgette Heyer and Marion Chesney to blossom once more in Anne Gracie. Each author’s work becomes a little more racy, more modern despite the Regency setting, until Gracie’s Chance Sisters quartet. Not all of the Chance sisters are virgins before meeting their beaux and, so far, neither sister is quite chaste upon the day of her wedding. Let’s just say that special marriage licenses seem to be the order of the day.

Previous novels in the series lead seamlessly into The Winter Bride

In the first Chance Sister novel, Autumn Bride, first we meet the beaux of the book, Lord Max Davenham, who restored his family fortunes that suffered at his uncle and grandfather’s hands. As a stripling of eighteen years, Max set out to China to repay his debts and build a fortune as a partner in the Flynn & Co. trading company. Nine years later he returns to London, summoned by a friend concerned about his aunt’s wellbeing.

Abby Chantry works as a governess; she has too much love to give and has experienced too much heartbreak for her twenty-six years. Daisy, a gutter-born maid, helps Abby rescue both Abby’s sister, Jane, and Damaris from a brothel where they were to be auctioned off to the highest bidders.

Hijinks ensue during which our heroines rescue Lady Beatrice Davenham from corrupt servants then forge a new family together.

One of the most delicious aspects of this story, other than the budding romance and forging of a new family, is how Anne Gracie gently mocks those with Literary aspirations whose focus is Symbolism, Metaphor and Deeper Meaning. Meanwhile, Gracie’s heroines and their friends relish Pride and Prejudice.

The second Chance Sister novel opens with Damaris escaping China in horrific circumstances to arrive in London and be carried, kicking and screaming, to the brothel. Her traumatic past inspires a vow to never marry. Instead, Damaris’s dream is to own a cottage in the country with a few small animals and to paint pottery for a living.

Freddy Monkton-Coombes is a rake of the highest order, even mocking Pride and Prejudice, to which he was introduced via Lady Davenham’s (non)Literary Society. When Mother determines to marry him off, Freddy hits upon a capital scheme. He’ll devise a fake engagement with the one suitable girl who won’t want to actually marry him.

Meeting Freddy’s parents is a revelation for Damaris. Her sojourn in the country during winter reveals the cause of Freddy’s estrangement from his parents. Damaris’s artistic leanings inspire a foray into the family gallery and an experiment in disrupting the household.

The Winter Bride is an excellent marriage of romance, comedy and character. Shorter and more modern than Pride and Prejudice, The Winter Bride nonetheless captivates readers as we embark on this roller-coaster romance. Good manners prevent risky declarations until we, the readers, are seduced during the climax.

Anne Gracie spoke to Nalini Haynes of Dark Matter Zine in an interview and as part of a panel discussion.