Shelby is walking along a beach when she finds a foot in a shoe. No body, just a foot. She reports it to the police then, before she even leaves the police station, she starts hearing a voice. At first she thinks it’s the voice of one of a serial killer’s victims who blames her for not catching the murderer.

Although Whisper To Me starts out like a fantasy or horror story, it’s a young adult novel focusing on mental health issues in a contemporary setting: a dying tourist town in New Jersey.

I never met a Nick Lake book I didn’t love. Previously I read There Will Be Lies, Hostage Three and In Darkness; they’re all excellent stories with incredible depth demonstrating detailed research and an amazing ability to write in other people’s shoes. You don’t need to read this review, just read his books.

After not having any friends for years, Shelby becomes friends with a sex worker. When Shelby’s father finds out, their argument is heated, reflecting society’s polarized views. (Nick Lake gets a ‘hell yeah’ as a feminist or feminist ally.)

Shelby’s father is a veteran who suffers from PTSD (Post Traumatic Stress Disorder) as well. Shelby’s mother, the stabilizing influence in the family, was killed during a robbery. The net affect: they deal with their anger in different ways. Two people living together and yet alone, walking on eggshells around each other.

Shelby hears just one voice. It’s not an internal voice like the critical parent so many of us internalize; it’s an audible voice that she believes has power to hurt and even kill. Over time, Shelby engages with the mental health system to seek help. Specialists prescribe different approaches, as in real life, and, as in real life, Shelby doesn’t comply with their prescribed regime.

I feel somewhat ambivalent about the mode of the novel being as a letter to a boy Shelby fell in love with, making the entire story about the romantic relationship. However, Shelby explains that there were two stories: what the boy knew and what was going on for her, much of which was away from the male gaze when the action took place. Also, her writing is a plea for him to forgive her and return, creating tension: what did she do? Will he forgive her? What’s so special about this boy?

Whisper To Me is nuanced, gritty and realistic. Although the novel focuses on mental health, most people can identify with having an internal critical voice, a less-extreme version of Shelby’s voice. Nick Lake has conducted research, consulted with specialists, experienced mental health issues and, on one occasion, heard an audible voice himself. His writing demonstrates his ability to put himself in others’ shoes, to love his flawed protagonists and, by doing so, to imbue his readers with love or at least empathy for flawed people. I highly recommend Whisper To Me to readers over the age of (pulls out a figure arbitrarily) 12, to writing groups and literature classes. 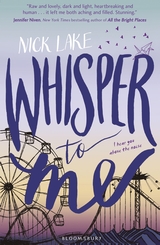