Authors around the world share #WhereIWrite live on Periscope

Twitter and Hachette are delighted to be working together on an exciting new project made possible with the launch of Twitter’s new app, Periscope.

Every day during April an author is using Periscope to broadcast to talk about what they are writing live from the place where they write. The videos are tweeted by the authors, their publishers and Twitter to millions of followers using the hashtag #WhereIWrite. Readers can join in live by downloading the Periscope app and following their favourite authors. Periscope will alert readers when the authors are broadcasting live so they can tune in.

These live video broadcasts are packed with personal information and may even include readings from brand new, just written material.  After the live broadcast has finished the videos will be available to view on the Where I Write microsite (www.whereiwrite.tv)

On 2nd April, Huey Morgan (@OfficialHuey) author of Huey Morgan’s Rebel Heroes: the Renegades of Music & Why We Still Need Them (Cassell) became the first author to use Periscope during this #WhereIWrite series.

Other authors taking part during April include:

… with more authors signing up every day.

Damian Horner, Hachette’s Brand Development Director, said: “Periscope is a brilliant development from Twitter and we are thrilled to launch this experiment with them right at the start.  This series of live video broadcasts – and others we already have in the pipeline – will bring readers closer to their favourite authors, throwing light on lots of personal details about where, how and what they write.  We are delighted to be in at the very beginning and look forward to working with Twitter as Periscope evolves.” 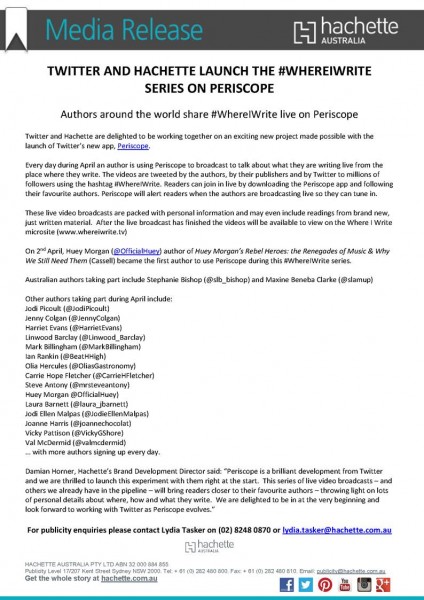