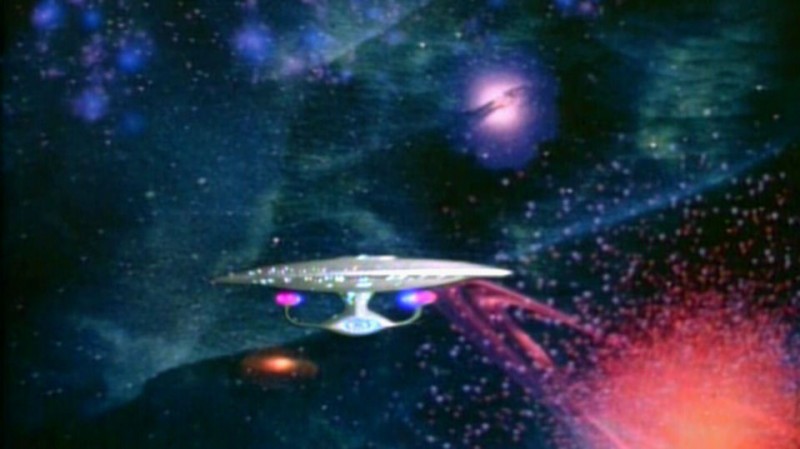 Kosinski (Stanley Kamel) is an arrogant engineer hurtled into the Admiralty’s good books when his gobbledygook engineering formula produces unwarranted results. “You don’t understand,” seems to be his typical response. His mysterious assistant, an alien known only as “my assistant”, raises no questions, not even from security personnel. That’s not a puppet-mastery plot device to get us to Where No One Has Gone Before, surely? [snark]

Wesley (Wil Wheaton) is curious about this alien, his programming and his role in the fine-tuning process that is supposed to improve ship performance. Within hours Wesley becomes irrevocably attached to this mysterious stranger. Irrevocably — at least for this episode.

The menz get on with the engineering work while Wes watches the assistant. Wes corrects the assistant’s programming with neither input nor permission from the grown ups. Then the assistant fades out during the test. Wes is, of course, the only one who notices. And when he tries to tell Riker, he’s brushed aside.

The test hurtles the Enterprise millions of lightyears away into another galaxy.

Because Wes is a genius.

When the assistant tries to help them return to their space, he takes them into another new galaxy where thoughts become realities, dreams become living nightmares.

The problem is, Wes is incapable of reverse-engineering the engineering he did to get them into trouble and now the assistant, newly named the Traveler, is incapacitated. Pumped full of stimulants by Dr McCoy — I mean Dr Crusher — the Traveler rises from his death bed to fly them home again.

It turns out that, although it was Wesley’s genius and belief that got them into trouble, he was unable to get them back out again. The whole crew had to not think of pink elephants to get them back into their own galaxy. Troi got into her happy place, buzzing from all the positive vibes from the terrified crew members confronted with a choice: try to believe in a complete stranger they’ve never met or be stranded in the Twilight Zone.

Before he disappears, the Traveler tells Picard to nurture Wesley. Because, y’know, teenage interference putting the ship and crew in danger twice so far this season needs to be rewarded.

I get that younglings think they know more than they do. I get that they want opportunities and recognition. I also know that they need experience and training to deal with the shit life throws at everyone. No-one will put a boy genius in the pilot’s seat of an airliner, so why put an immature brat whose interference has resulted in crew deaths at the conn?

Appealing to the family audience shouldn’t require dumbing down television.

‘Where No One Has Gone Before‘ is trite, hole-ridden and a simplistic attempt at justifying “PERKY BOY ON BRIDGE”. A cadet-training program for isolated and gifted children of senior crew would have had more sound basis and would not have instilled a desire to hurl objects at the TV.

I am enforcing a maximum of 1 episode a week before I get burnt out on these re-watches.