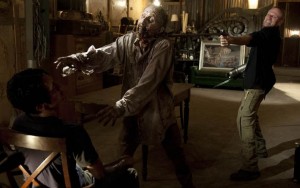 ‘When the Dead Come Knocking’ begins with Merle (Rooker) trying to torment Glenn (Yeun) and Maggie (Cohan) into revealing the location of Rick’s (Lincoln) group.

The group let Michonne (Gurira) into the prison after she collapses from her gunshot wound outside the fence and surrounded by zombies. While the group waits for Michonne to tell them her name, Daryl (Reedus) brings them all to a ‘surprise’ — seeing that Carol (McBride) has survived.

Michonne watches the heartfelt reunion from afar. It compels her to tell the group who she is and where she has come from. She doesn’t mention Daryl’s brother by name.

Hershel (Wilson) tends to Michonne’s wounds while the rest of the group decide to plan a rescue for Glenn and Maggie.

Glenn lies to Merle about the number of members in Rick’s group. He is caught out when he mentions Andrea (Holden) who Merle knows hasn’t been with them for months. Merle locks Glenn, who is tied to a chair, in with a live (kinda) zombie. Glenn manages to kill the zombie.

The Governor (Morrissey) initially tries a softer touch to get Maggie to speak, uncuffing her etc. However, it takes a sick turn when he makes her stand up and strip off, then slams her head on the table and bends over her. She is dragged, still half-naked, in to Glenn’s room where she finally breaks after a gun is pulled on Glenn and reveals where Rick’s group is.

Rick and Carl (Riggs) decide to name the baby Judith.

The Governor involves Andrea in the experiment Milton (Roberts) is running. The experiment is searching for trace memories in walkers of who they once were. A man dying of prostate cancer has given himself to science. When he dies and turns, Milton tries to draw from their conditioning to bring out the man’s subconscious. The experiment fails and when Milton puts himself in danger by freeing the walker, Andrea is forced to kill it.

The episode ends with Rick, Daryl, Oscar (Ward), and Michonne at the gates of the town.

It has taken me a while to warm to the character of Michonne, however this episode was a brilliant showcase of her talents and will for survival. She is ruthless and echoes much of Shane’s ruthlessness which could have made her despicable. Somehow though, it works.

Maggie and Glenn have maintained throughout their respective tenures a sense of likeability. It’s a trait that most other characters haven’t been able to match. As a viewer this makes their current peril all the more nerve-wracking. Here’s to hoping the dynamic duo are rescued by their fearless leader soon.

‘When the Dead Come Knocking’ has balanced some great scenes with decently paced progression. Good work all around.

‘There ain’t a pair of nuts between the whole pussy lot of you.’