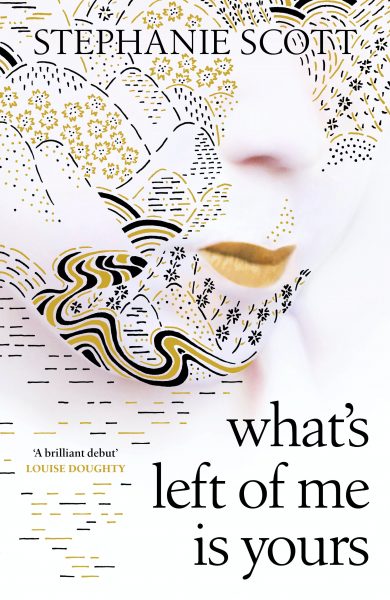 Sumi is a young woman, just barely qualified to practice law in Japan, when she receives a strange phone call. She feels compelled to dig into her mother’s death. Sumi’s mother, Rina, is – years earlier – living in a loveless marriage that has rendered her colorless, invisible. While she serves her husband and child, she is disappearing. Rina’s husband hires a Wakaresaseya, a breaker-upper, so Rina will leave him and sacrifice everything she owns to enrich him in the process. The Wakaresaseya falls in love with Rina and says “What’s left of me is yours”.

Scott’s novel was inspired by a real trial but this story is in no way based on that trial. Instead, Scott’s intensive anthropological research delved into the past to set this story several years prior in an evolving culture. The mid to late twentieth century saw profound social changes globally and no less in Japan, which saw extreme poverty by the end of World War II, entered into boom then decline. Along with surges in wealth and poverty came significant cultural changes. Scott’s novel explores some of this cultural heritage alongside domestic violence, marital abuse and familial relationships.

Very early on, we learn Rina is dead in Sumi’s present. The question appears to be: how did she really die? As Rina’s relationships evolve both with her husband and the wakaresaseya, romance came to the fore. I wanted a twist, a surprise, at least a story that reflected on injustice in the legal system.

However, Scott’s novel is a meticulously researched story that entices with romance only to confront readers with the brutality of domestic violence and the injustice of treating victims of crime – the families who lost loved ones to murder – as ‘forgotten parties’.

Various forms of domestic abuse and violence are portrayed throughout the novel. Somehow I felt that Scott portrayed this abuse accurately and yet without the imminence, the re-traumatizing affect, that most accurate portrayals inflict. The worst scene was the death scene but even that wasn’t as horrifying as it could have been.

Although the author is not Japanese, she is Singaporean British and lived and worked in south east Asia. She has won awards for her anthropological research.  I am no expert on Japanese culture but the level of detail portrayed in characters’ lives and culture felt real, it felt like a lived experience.

My confession: I wanted a different ending, I wanted this to be a different story. That is in no way a reflection on Scott’s writing. Therefore, in this review I endeavor to unpick my personal reaction from the literary quality of this story. Perhaps my strong reaction to Scott’s story is a reflection of her brilliant storytelling: I was attached to the characters and, 2 weeks after finishing the story, I still feel so attached to these characters that I grieve for their tragedy. I want a different outcome.

What’s Left Of Me Is Yours comes highly recommended by the likes of Laurie Frankel (This Is How It Always Is), which made this book a must-read for me. Other authors recommending this novel include Jamie Ford, Fiona Mitchell, Rene Denfield and Marti Leimbach. Perhaps the best summation of this book is that it is brilliant but not everyone will enjoy it. You may even want to hurl it across the room (I did), but that’s a reflection of the author’s skill. Read What’s Left Of Me Is Yours if you enjoy Helen Garner‘s and Chloe Hooper‘s books.