Hi Folks! This is a post to let you know what’s happening over here.

Now the Inauguration is over and the day went peacefully, I have the headspace to update you about Dark Matter Zine‘s status.

By the way: CONGRATULATIONS AMERICA!

I followed a little of what was happening on Twitter.

This ain’t just a fist bump. This is a “biiiiitch” moment and black women & little black girls FELT this one, honey 💅🏾 pic.twitter.com/hOMz6vR10m

From MAGA to Gaga was delicious.

From MAGA to GAGA: Mike Pence, a journey. pic.twitter.com/LrjxQO2t9h

I digress but can you blame me? So much joy. People all over the world celebrating the end of the Orange Soufflé’s reign.  Even sitting here in sunny summertime Canberra I’m living vicariously via Twitter.

The reason for this post. I moved. Again. As in: this is the third place I’ve lived in 7 months. From a teeny apartment north of the lake (Canberra is divided – by locals – into north of Lake Burley Griffin and south of the lake. The other lakes receive much less attention. Which is lucky.

Why lucky you ask?

Because if the other lakes received as much attention, I wouldn’t be able to afford my shiny new house that is practically lakefront property.

What this means for Dark Matter Zine

This is both excellent and temporarily bad for DMZ.

Excellent because I now have a study that is as ideal as I can afford. No window shining light into my eyes or onto my screen. There is a window letting in natural light but it’s in an alcove that, sitting here facing that direction, I can’t see because it’s deeply set into the alcove. for the past 6 months I’ve hated and loathed going into the study because the two windows embracing my computer made it horrendous to work at during the morning, which is my preferred time of day for doing thinky writing and reading and responding to emails. And now THIS.

(Also this home doesn’t stink, has an oven and dishwasher that work, we don’t share a stairwell with people stomping up and down the stairs, there isn’t mold embedded in the walls of the stairwell that the body corporate paints over instead of treating the mold and treating the cause – the building leaks – and so on and on and on.)

My iPad is NOT disability accessible for emails. It does weird things like only show tiny text that goes off the screen or goes blank when I enlarge emails. And it’s worse than it used to be. Thanks Apple.

So, yeah, my inbox is pretty full – I’ve been procrastinating, waiting for my study – and I will catch up! If you’re waiting on a reply, I will get to you soon! Maybe not until next week though, because my brother in law is coming to visit today. And he’s going to take some of our furniture we had in storage that is now filling up our garage, so that’s an added bonus! 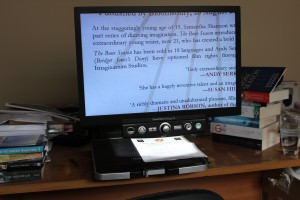 And the most fabulous thing is:

I can now read sitting on the couch.

This might seem like such a “normal” thing to celebrate that my happy dancing seems strange. However, I read using a desktop magnifier (also known as a CCTV).

In Melbourne for a while I had it sitting on a trolley so I could read sitting on the couch. But it was awkward. The couch was too low. I had to balance with a pile of cushions underneath and behind me. In the end I gave up and put it back on a desk.

Reading sitting at the CCTV while it’s on a desk is like sitting at a computer to read except my arms are stretched out too. Imagine, instead of reading curled up on the couch, every paper book you read was like sitting at a desktop computer only more physically demanding. Not quite as enjoyable and definitely more tiring.

However, now I have a different couch. The CCTV is sitting on the same trolley downstairs so I can glide it sideways – on the vinyl flooring, no carpet downstairs – to pull in front of me and I only need one or two cushions behind me to push me forward enough to read comfortably. It’ll never be as comfortable as just holding a paper book, but that’s an option I do not have.

With the curtains closed to cut down on ambient light, I love reading like this. It’s so much more comfortable and appealing that, in the past week, as well as struggling to unpack and organize this CHAOS, I’ve read two and a half books. I predict many more reviews this year than in the previous 5 years.

I feel I have returned to my first love.

As well as the love of my life, my husband. I have the best of both worlds.

Sadly, there is a downside to all this fabulousness happening. Apart from struggling to organize and downsize, and having to give away BOXES of books because we have no room, WE ALSO HAVE NO INTERNET.

Or, I should say, we have no landline.

Currently my only internet is wifi. This means I cannot record podcasts. Wifi is so bad it struggles to play YouTube videos and often cuts out, skipping, low frame rate, or dying altogether. This is Very Bad when trying to record a podcast.

Not to mention the fact that I can’t access 99.9% of the internet because my ISP, Telstra, appears to have DNS problems. The other day I had to have coffee at the Little Istanbul (outside of course) so I could use CBR Free Wifi to look up book details for reviews I’ve written. What a hardship! I envisage enduring this hardship several more times before the landline is connected.

Hopefully within the next week or two the landline will be happening so we’ll have decent service once more.

Can anyone say “yay” for ACTUAL HONEST-TO-GOODNESS NBN FTTH (FIBRE TO THE HOME)? My recordings will be crunchy crisp and clear, at least on my end. (I encourage guests to use landlines too and not wifi but sometimes this just can’t be avoided.)

Before I moved, I talked to J M Frey about being a guest on DMZ. I’ve also read her short story collection, so there’s a review coming soon as well. I’m really excited about chatting to her after reading her collection!

I’ll flutter my eyelashes at the minion to wangle a couple of podcast edits close together to catch up. So, if you are an author or publicist or you’re a fan who wants a specific interview, either email me or comment below. No guarantees but I’ll consider all suggestions.

(Some authors don’t do interviews. Like Anh Do, who interviews other people for TV but isn’t available for interviews by mere mortals like myself.)

I’ll be chatting to the awesome J M Frey ASAP then watch this space to see what’s happening.

Keep in touch and please let me know what’s happening out there. I swear it’s like I have my head buried in the sand at times! Not intentionally though!

Thanks for dropping by and reading this rambling post. I hope you’re feeling lighter and celebrating too, even if it’s just because civil war was averted.

Stay safe out there and may 2021 be better than last year.