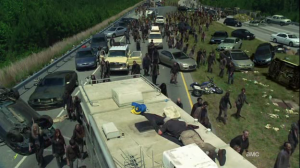 ‘What Lies Ahead’ begins with Rick (Lincoln) and the group of survivors beginning the journey from the CDC to Fort Benning. A trip that Google Maps tells me is 121 miles – that’s 194.7 kilometres through zombie infested territory for the metric users playing at home.

En route Dale’s (DeMunn) RV blows a radiator hose while passing through a section of freeway jammed with broken down and parked cars. The group are scavenging fuel and supplies from the other cars when a herd of walkers approaches. Most of the group hide under cars, but T-Dog (Singleton) slices his arm on metal and Andrea (Holden) is attacked by a zombie in the RV. They are rescued by Daryl (Reedus) and Dale respectively.

During the herd’s movements, Carol’s (McBride) daughter Sophia (Lintz) runs away and is chased by two walkers. Rick follows and hides Sophia while he draws away the zombies chasing her. After defeating the zombies, Rick returns to find that Sophia has run away again. Rick gets Daryl’s help tracking Sophia, but they return before sunset and agree to pick the search back up at first light.

Before leaving to help search for Sophia, Andrea tells Dale that she blames him for not letting her die in the CDC explosion on her own terms. As a result Andrea asks Shane (Bernthal) to take her with him after she overhears him telling Lori (Callies) he is leaving the group.

Rick and Shane keep searching with Carl (Riggs) after sending the rest of the group back to the freeway via the creek so they are back before sundown.

The episode ends with Carl approaching a stag in the woods and getting shot by the bullet that passes through the animal.

This episode has a scene involving Daryl and Rick disembowelling a zombie that has recently fed to ensure its meal wasn’t Sophia. The Walking Dead isn’t a show for small children or the squeamish, but this was extremely graphic and viewer discretion is definitely advised.

‘What Lies Ahead’ is a great beginning to the second season. The fractures in the group are starting to become even more obvious than before. The different personalities and their reactions to different situations has been great so far. This season looks to be a good one.

“Gratitude? I wanted to die my way, not torn apart by drooling freaks. That was my choice. You took that away from me, Dale.”