We’re gonna need a bigger cup: take one! I spent several hours over the weekend making this card. SEVERAL HOURS. Then, this morning, I discovered the shark has flopped forward so doesn’t want to rock independently when the card rocks. Sigh. I’ll figure it out. Eventually. Still, hopefully my FIL (father in law) will enjoy this card, especially as we know he enjoys getting coffee from us for his birthday!

Whelp. I had the stamp (Caffeinated Shark) and the tree and the hillside die and the wave border (that I can’t find at the moment) but I do NOT have a circle die the right size. SIGH.

I cut out several circles BY HAND. The front and back of the card either needed heavier weight cardstock than I was using (in hindsight I have some heavyweight watercolor cardstock that would have been great) or I had to glue several layers together to give it strength. So, of course, I didn’t think of that at the time and took the much more onerous option. Argh.

A layer of blue cardstock glued to the front of the top stack (a total of 3 layers of card), a similar but white stack at the back, connected only at the top is the card frame. It opens at the bottom in an A frame for support.

I cut the hillside and colored it with copic markers for sand. After stamping and coloring the tree I cut it out BY HAND (screams silently) so I didn’t have the white border typical of most die cuts. Three layers glued together gave the tree some strength so it pops up a little from the background and the tree is strong enough to cope with hanging off the top of the card.

Likewise the shark is stamped with Hero Arts Intense Black Ink, colored with copic markers, fussy cut and glued in a stack of three for strength. Both the shark and I need a bigger cup of coffee.

The below photo shows the shark adhered to acetate (use double-sided tape for acetate so it sticks) and the acetate is attached using a brad. 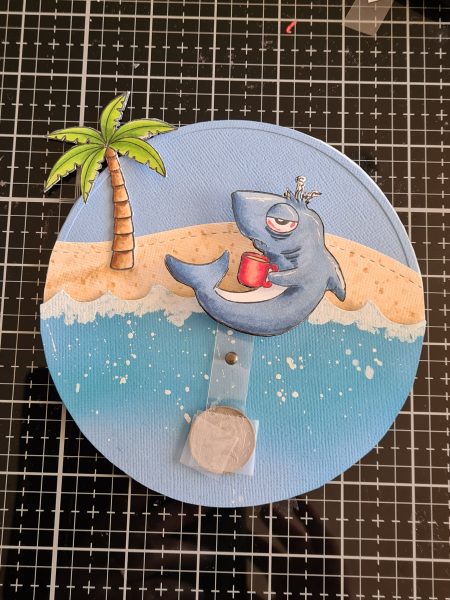 I was less than successful in the end: yesterday my shark was rocking a bit – not as well as in MFT’s demo video of the Magical Friend – but today it wasn’t rocking AT ALL. It only moves if I manipulate it manually. Sad Face.

Anyhoo, you can see I ink-blended using Distress Oxide Inks and some white paint for foam and splatters.

And, if you’re interested in a rocking card THAT ACTUALLY WORKS, watch this video on how to put one together.

I’ll try again. Probably after getting the die for the pivot point because I’m learning that these interactive cards are much harder to make, much more fraught, if you try to wing it without the dies.

(BTW I have that dragon die and am planning to make a similar card. But now I think I need the pivoting die to make the thing work. Sigh.) 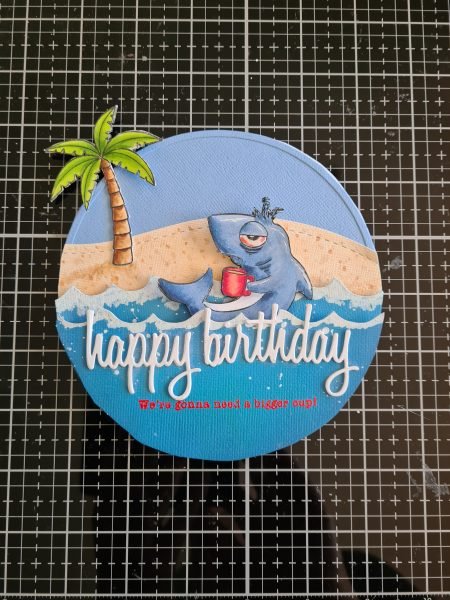 In the end the card looks like this when stable and the video of it rocking is at the top. I still kinda like it rocking and for the dimension but I hope, next time, to achieve moving parts. I’m gonna need a bigger cup of coffee first though.

Thanks for bearing with me and wow, you are at the bottom of the post.

Try not to watch too much news in the coming days.

After making this card I was inspired to make a much quicker card using some of the same supplies (that I hadn’t put away yet).