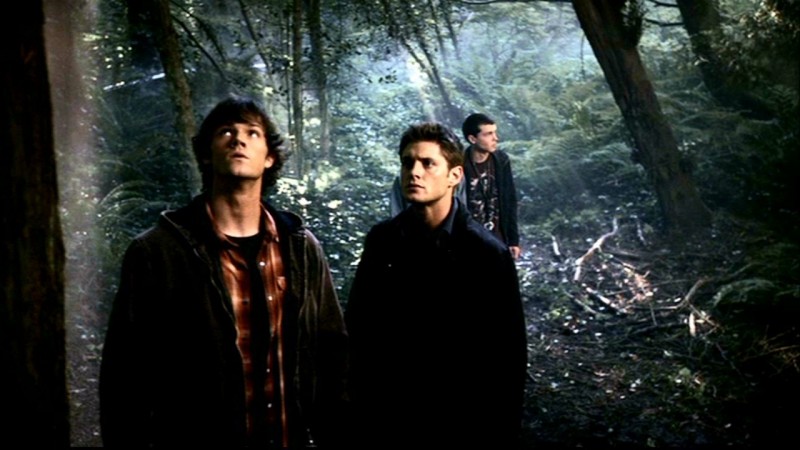 For the original commentary of Supernatural‘s pilot, which explains what we’re doing, how it started and why, click here. Not gonna repeat myself BECAUSE BORING.

I’m wondering how long I can get away with low star ratings for Supernatural zodes… We’ll see.

Straight after watching the pilot — and pausing for drink breaks. And chocolate breaks — we launched in to episode 2 of Supernatural. Sadly, I didn’t take notes (see the original review) so the real peanut gallery doesn’t start until episode 5, but here goes…

People are dying in national parks. Sam wants to help. Dean thinks it’s not their responsibility — until it turns out it *is* their field of expertise. The name of the episode isn’t a clue. That’d be too obvious, right?

Our boys rock up to the national park claiming to be rangers. In their beast of a car totally lacking in 4WD capabilities, wearing cool city clothes including, if I remember rightly, A LEATHER JACKET. These alleged rangers then hike into the park to investigate disappearances WITHOUT BACKPACKS, COLD WEATHER GEAR, WATER, FOOD — oops, wait, I tell a lie, I think one had some chocolate or lollies with him. So, y’know, REALLY CONVINCING rangers.

Although I would have told the boys to get lost in the figurative sense, the victims of the we— [cough] the concerned family and ranger allow Sam and Dean to hike in with them. When they arrive, the find remnants of the campsite and—

N: Yep, I was getting to that.

R: That wendigo relied on not being seen.

N: Like in the Empire Strikes Back BEFORE it was Lucased, the wendigo was better off-camera than on. The suspense. The lack of something worthy of laughter.

Before long, even CJ was yelling at the screen while we waited for the redshirts to die, as if she hadn’t seen the zode before. Because they were silly. And group conflict puts them all in danger. Like, NONE of us had ever seen THAT kind of cliché play out before, right?

Dean (Jensen Ackles) just looks SO SMUG when he smiles. Sometimes it’s appropriate and sometimes — in the last review I did mention the cheesy acting, right?

IT’S STILL CHEEZY. As in, cheddar with mozzarella on top.

And besides, every fantasy show ever and many fantasy series feature wendigos.

I could be mistaken — it’s been a few weeks since I watched this zode now — but I think it was this zode, like THE WEEK AFTER SAM’S GIRLFRIEND DIED, that the caring and compassionate Dean told Sam to get his rocks off. To move on and into the sack with hot chick of the week. Seriously? Ugh.

Sam, however, is more of a sweetie than his quite obnoxious older brother.

N: Mmmm… yeah, but he’s also quite obnoxious at times. Not a keeper. Sam’s a keeper. I hope hanging out with Dean doesn’t change him for the worse.

CJ: There was a conspicuous absence of urban legends of gruesome deaths following a pattern over the course of decades, either.

N: The writers seem to have a love of blood dripping down, especially the blood of dead people dripping on people.

CJ: I agree. Dripping blood is par for the course with most of my viewing.

N: So you actually enjoy watching blood dripping on people? WHY???

CJ: Better them than me?

N: I have to admit, in spite of bad special effects and cheesy acting, this episode got my heart racing. And it’s fun to heckle. I lurv being the peanut gallery.

Apparently Rebecca & CJ love me jumping. I haven’t shrieked, for which they should be eternally grateful. With them sitting on either side of me, there is the potential for me to deafen both of them for life. >:-]