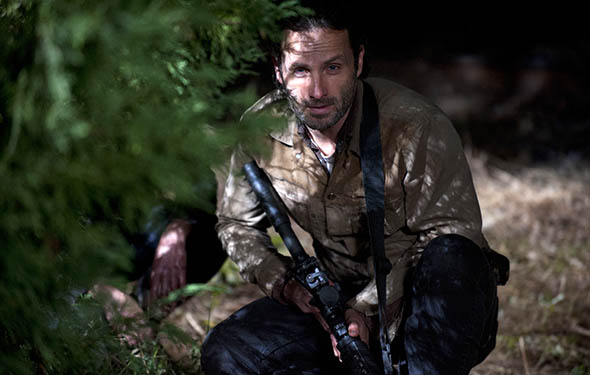 ‘Welcome to the Tombs’ begins with the Governor (Morrissey) torturing Milton (Roberts). The Governor blames him for the eight men who died in Merle’s attack because Milton burnt their walkers. Milton asks if the Governor killed Andrea (Holden), so the Governor takes him to see her and tells him there’s no way he is leaving the room without killing Andrea. Milton attempts to kill the Governor instead, but is shot by his target. The Governor tells Milton he will die then turn into a walker and eat Andrea.

The Governor and his people arrive at the prison to launch a full assault. Rick’s (Lincoln) group appears to have left already. The Governor’s group explores and walks into a trap where alarms and firecrackers go off, luring zombies. We see Hershel (Wilson), Beth (Kinney), Judith and Carl (Riggs) the group hiding in forest nearby. Rick, Michonne (Gurira), Daryl (Reedus), Maggie (Cohan) and Glenn (Yeun) ambush the Governor’s people as they escape. A boy runs into Carl, Hershel and Beth in the forest, he tries to surrender his weapon but Carl kills him. Carl lies to his father about what happened, but Hershel reveals the truth: Carl gunned the kid down in cold blood.

Milton tells Andrea he dropped a pair of pliers behind her. Milton rises just as Andrea gets pliers. She manages to free herself from the handcuffs just in time for zombie Milton to descend on her.

The Governor, Martinez and another guy roadblock the Woodbury citizens who are fleeing the prison carnage. When they tell the Governor that they will only kill biters — not humans — the Governor snaps and guns down his own people. Martinez and the other guy are the only ones left standing. Woman stays laying under dead man and survives.

Daryl, Rick and Michonne head to Woodbury. En route they see the Governor’s destruction of his own people and find the sole survivor, Karen.

When they get to Woodbury, Karen tells Tyreese and Sasha what the Governor has done. They go searching for Andrea and find her bitten with Milton dead(er). Andrea tells them she just wanted to save people from dying and that she needs to end it herself while she still can. Michonne stays while she ends her life and undeath.

‘Welcome to the Tombs’ ends with Daryl, Michonne and Rick return to the prison with Tyreese, Sasha and many of the remaining Woodbury residents, including Karen, in a bus.

Regular readers will know that Andrea has been one of my least favourite characters throughout the series. There have been more than a few occasions where I begged the other characters around her to throw her to a zombie horde. So I should be happy now that she was munched on, but NO. They just HAD to go and have her redeem herself at the last moment.

That’s not even too much of an exaggeration. Even halfway through this episode, I was fed up with her. There is a man in the room who is about to die and turn into a zombie at any moment. So does she move her butt to get the pliers he dropped and get free? No, instead she wastes time yakking away about this, that and the other. Gah!

Season three has been an enjoyable season with riveting ongoing plots, a great villain, terrific closure and sprinklings of fun humour. Characters have taken winding turns to end up in places completely different from where I originally thought they would, or could, end up.

I am definitely looking forward to settling in with season four.

‘In this life now you kill or you die. Or you die and you kill.’