The Addams Family was originally a series of unrelated cartoon panels, which became a tv series 1964-1966. Movies followed in the 90s when Hollywood started recycling stories with nostalgia. Wednesday is the eldest child of this family, a goth girl whose origins precede and, perhaps, influenced contemporary goths.

Now Wednesday (Jenna Ortega) has her own tv series where her family are only cameos or special guests for key episodes. Except for Thing, the disembodied hand who – kudos! – speaks in sign language now.

Wednesday attended a “normie” (normal/muggle) school where jocks tortured her younger brother. Only she tortures her brother, she says. So, to school the jocks, she dumped pirañas in the swimming pool. Apparently someone lost a ball. And the principal expelled Wednesday. The court requires her to undergo counselling as well.

Wednesday arrives at the school where her loving parents met. She feels intimidated by following where her mother excelled. As a hostile introvert, she expects little.

A murdering monster kills people in the woods near the school. The sheriff declares the school responsible but must prove it.

The town is split between “normie” and “outcast”, the latter being magical or supernatural in some way. Acceptance, at least by some, is motivated by the principal’s generous donations that keep the town running. But the division is there. Think the worst kind of inter-school rivalry. So you have intra-school factions and larger social factions at work.

Wednesday’s roommate Enid Sinclair (Emma Myers) is a Pippi Longstocking type, obsessed with unicorns and rainbows, although she’s a werewolf who hasn’t managed to change yet. Wednesday is “allergic” to colour, so she strips her side of the window of rainbow decals. Her half of the room is stark in comparison. The clash of personalities is similar but Enid is determined to befriend Wednesday, whether she likes it or not.

Enid gives Wednesday the cliched school tour, pointing out all the groups. But instead of caffeine addicts, jocks and wannabe stock brokers, each of usual school tropes convertes to supernatural equivalents.

And, yes, Wednesday is audiodescribed, and it’s one of the better quality descriptions. The only one I can think of that was significantly better was Zombieland, the first movie, because that audiodescription added to the humour. In my opinion, more comedic screen productions need actual comedy writers for audiodescription. I digress.

I want to expound on this series but I fear spoilers might detract from enjoyment.

Fan service abounds with cameos and references to the movies and previous TV series as well as contemporary references thrown in.

Jenna Ortega, who portrays Wednesday, is perfectly cast. So flat affect at times yet so expressive – even in a minimalist way – at others. Other characters are, in themselves, types and well-cast. It’s fun to see Gwendoline Christie (Lucifer in Sandman, Brienne in Game of Thrones) in this role. Likewise Christina Ricci, who played the child Wednesday in the 90s movies.

One character seemed destined to be outed as a Stepford wife type character, especially as evidence kept pointing to in that direction. Too obvious, I thought. Eventually it transpired that the plot wasn’t that complex. And all the predictable things happened. Except the one I really wanted

Although Wednesday’s characters and plot follow well worn paths, this series is a lot of fun. A lot. And provides essential escapism in the current era. I love it.

For a literary equivalent – or better – try Deadly Education by Naomi Novik. 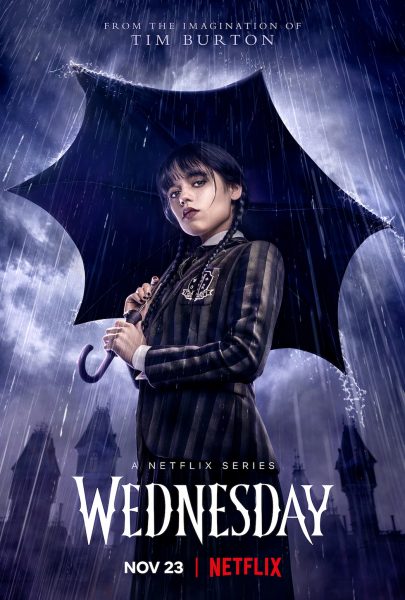