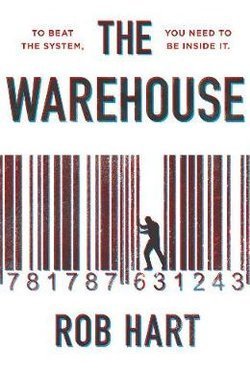 Gibson is the Jeff Bezos of Cloud, The Warehouse‘s version of Amazon. Gibson is dying so he’s touring his empire, a chain of MotherCloud live-work centres across the United States. He’s also blogging his life story. (Cloud is The Warehouse.)

Paxton was a businessman sent out of business by Cloud, who demanded he cut his sale price until he wasn’t making any money at all. His business closed. Now he’s hard up, looking for work. And he is given a job — by Cloud.

Zinnia is an infiltrator. She’s spying on Cloud for an unknown employer.

The corporate introductory videos are chilling: the subtext is that Cloud has the work ethos of Amazon warehouses. Amazon abuses its employees. Even here in Australia, where we have (or had) legislation to protect workers, Amazon has found loopholes or the government has introduced loopholes to maximise company profits. These loopholes prevent workers from going to the toilet for their 8 hour shifts; if they do, they will miss out on future employment. Employees IN THE REAL WORLD have taken to wearing adult diapers to cope. The details are shocking, horrendous. The Warehouse introduces two characters going to work in this hellish environment with Apple-like surrounds and technology, and employment conditions suspiciously like those of the migrant-slaves in Rohan Wilson’s Daughter of Bad Times.

The Warehouse is a dystopian novel commenting on social issues, extrapolating where we could be in ten or twenty years. Characters submit to social engineering while trying to build lives for themselves. Romance, drugs, murder and industrial espionage combine in a compelling story. The Warehouse is part Max Barry’s The Company, Syrup and Jennifer Government but without the biting satire and solidly set in America instead of Australia. I highly recommend The Warehouse: 4 out of 5 stars. Below I run through some of the social issues that give the novel flavor, making it so compelling.

The Warehouse vs Disabilities

By page 58, The Warehouse has overtly mentioned disabilities several times and implicitly excluded people from employment by literally closing doors to prevent the last applicant entering the selection process. Paxton seemed to notice people who may have had disabilities on the bus ride to the application centre. The application processing centre is in the middle of nowhere with a long hike in 100+ºF heat from the bus stop to the processing centre, can anyone say ‘job-snobs’? But Paxton doesn’t notice people with disabilities as successful applicants.

No one used the disabled seating on the train ride from the Cloud entrance to the dorms. Zinnia travelled from her dorm to work on her first day in a train full of standing people relying on their movement for balance to stay upright. It appeared there were no handrails. Zinnia notices that

The crowd getting off at the main warehouse facility were mostly young, fit. No older folks, no heavy folks, no one with any clear disabilities (p. 58).

Once upon a time, people with disabilities would have been employed for this kind of shit work. ‘Sheltered workshops’ like Bedford Industries were known for their high standard of output including preparing wholesale orders for the flooring installers, for example. But bigotry rules. And when the job market has a surplus, people with disabilities fall by the wayside.

expected to see a living space that was more handicapped accessible, but it was the same as her own. Same narrow pathway, and as the woman rolled her wheelchair in, it barely fit.

This is after Cynthia dropped boxes while trying to open her front door and get inside. Zinnia left then

marveled at what that poor woman was dealing with. Then realized what an asshole she was for thinking of that woman as poor (p. 116).

Without disability access in her accommodation, Cynthia is disadvantaged, her ‘standard’ accommodation effectively becoming smaller. What may be a minimum (ugh) for a nondisabled employee has increased disadvantages for a disabled employee. I have questions: is Cynthia partially ambulatory? With this ‘normal’ accommodation, does she have and does she need hoists and handrails to help chair transfers? Because sounds like her Cloud-issued home does not have any disability access features. However, Zinnia is right about being an asshole for pitying the woman.

Later, Cynthia tells Zinnia that she had a workplace accident, due to taking shortcuts to meet deadlines. She accepts that it’s her fault, not Cloud’s although Cloud imposed punishing expectations on her that drove her to take the shortcuts in order to keep her job. It appears Cloud’s disabled employees mostly if not solely acquired disabilities due to stringent and discriminatory recruitment practices.

The Warehouse vs Workers

When Miguel introduces Zinnia to her workplace (p. 61), she learns some of the basics of working for Amazon. I mean Cloud. What he doesn’t tell her is that her two 15 minute toilet breaks and one 30 minute lunch break in her 9 hour work day aren’t long enough to get off the floor, to the toilet, then back on the right section of the floor. It’s implied but, with everything else, readers may miss it.

Miguel warns Zinnia that 20 minutes of her 30 minute lunch break can be taken up by just getting to the break room. He tells her to keep a protein bar in her pocket in case. Cloud is not as bad as Amazon, where employees are not allowed to take food onto the floor. He also tells Zinnia to stay hydrated but doesn’t mention how drinking relates to toilet breaks. In the real world, some adults wear diapers to cope with inhumane working conditions. Please excuse my repetition: I just can’t believe this shit happens in the real world but reliable reporters are exposing these working conditions in Australia and American today.

The Warehouse vs People of Color

“Most of the people who wear white (management’s shirt colour)… they tend to match their shirts, if you know what I’m saying?” (p.64).

So the people at Cloud are racist as well as ableist (anti-disabled) too. White male author seems pretty woke.

Later Paxton is called in as security in a suspected theft. The accuser says

‘Comes in here, acting all suspicious.’

‘What’s suspicious about me besides the color of my skin?’

“I’m not racist. Don’t go accusing me—“ (this is an abridged version of the exchange from p. 89).

This short exchange speaks to culture, the accuser’s and security officers’ personalities.

Later, Zinnia doesn’t like ‘A toad in a green shirt who gave her the You’re not white so I think you’ll steal shit look’ pp. 95-96). She’s half Latina and, ironically, she is going to steal shit. That’s not the point though: racism is alive and well at Cloud. Hart seems intent on exploring current social issues in this corporate dystopia; he’s incisive.

Furthermore, Dakota (Paxton’s partner) says, ‘Our job is to keep the numbers low. Think of it like a reverse quota’ (p. 91). This is why she pressured the accused to pay for a candy bar he denied stealing. Last year the police refused to act after I, a disabled woman, repeatedly complained about a University of Canberra assistant professor assaulting me, especially because there was CCTV footage and she admitted to the assault in email. Then the police harassed me because, they said, the University of Canberra told them to. The parallels here are not lost on me: a coloured teenager and a disabled woman are both victimised by ‘police’ for being victims of others’ crimes. I wonder how much this happens already and not just in a dystopian future.

The Warehouse vs Unions

When Paxton is inducted as a security officer, the first video says

‘If you suspect employees of organizing over grievances outside the traditional channels of human resources, please notify your local sheriff immediately’ (p. 74).

So unions are illegal, rendering workers powerless to assert any claim to human rights or dignity. Gibson, the Cloud CEO, blogs about unions being unnecessary.

‘The American consumer votes with his or her dollar — if a company is truly that bad then no one will work or shop there. Simple as that (p. 81).

Yeah, right. But it’s not that simple when the choice is unemployment and death in a Mad Max landscape outside or work there.

And the choice for people buying from stores like Amazon is complicated. In my opinion, it’s partly (but only partly) about price: without a shopfront, the retail agency saves money and can offer products more cheaply. Also, as Paxton tells readers early in the novel, large retail outlets can gouge manufacturers until they’re out of business. This drives down the retail price. It’s also about availability of product, accessibility of stores, and convenience.

Gibson talks about people being ‘too old to do the job’ wanting to ‘ride out that golden ticket’ by ‘collect[ing] their paycheck and their medical insurance and all that’ (p. 82) as if they’re wealthy enough to retire and live a life of leisure. So, being the entrepreneur that he is, Gibson organised a company without unions and where the work is so punishing that employees are disposable. This has no relation

to the current gig economy and the wealthy talking about ‘job snobs’ factoring into poverty and unemployment [snark].

The Warehouse vs Transgender People

Paxton seems to be obsessed with binary categories of sexuality. He sees and assesses Dakota, his new partner, repeatedly looking for clues as to whether this person is a man or a woman. This seems odd in light of The Warehouse already having introduced gender neutral or unisex bathrooms. Paxton assumes Dakota is a woman and addresses her as such, without using the nominal gender-neutral pronoun ‘they/them’. Gender issues then disappear from The Warehouse, apart from the gender-neutral bathroom being abused. Which leads us to the next point.

The Warehouse vs MeToo and Maternity Leave

By the time Zinnia gets through the security scan that doubles as soft-core porn while leaving work on her first day, she’s furious at lost time and angry with the perv (p. 93). Later the women’s bathroom is ‘out of order’ so she uses the gender-neutral bathroom. When she emerges from her shower, a manager demands to see her naked and watch her dress. He’s threatening (pp. 131-132). Although sex discrimination regarding job selection has not been raised, The Warehouse exposes sexual harassment and security deal with a man forcing women to do sex work. However, Cloud also rates women lower for getting pregnant and having babies because they can’t be in the office as much (p.105). I think The Warehouse deserves more than my cursory summary of issues. To do it justice, this book needs a thesis cross-referencing issues raised with real-world research. I’m not planning on taking it that far.

The Warehouse is chock-full of social issues breathing new life into an age-old trope of industrial espionage. And if the Soylent Green isn’t quite people, it’s still disgusting. I highly recommend The Warehouse.