After years of a strategy game followed by an MMO (Massive Multiplayer Online game), Warcraft has a definitive legacy and mythology with which a huge player base is familiar. Then along comes Warcraft the movie, seeking to do something different, changing the history, trying to engage viewers who don’t play the game while retaining players.

The orcs’ world is dying so Gul’dan (Daniel Wu), a fel magician, opens a portal to bring them to Azeroth, the land of humans, elves and others. Fel magic destroys: it destroys people and the land. This could be the end of two worlds! [dun, dun, Dunnn]

Cut to Ironforge (the dwarfs’ capitol city) and a gratuitous scene where Anduin Lothar (Travis Fimmel) is picking up a pistol from a dwarf. Not a gnome, which race is renowned for its engineering and machinery.

Don’t get me started on ‘Anduin Lothar’. I heard ‘Anduin’ and thought ‘he’s Anduin Wrynn’ then he was called ‘Lothar’ and I’m all ‘WTF?!’ As a WoW and Hearthstone player, this confused the story for me. He’s the queen’s brother? While watching I was all ‘IS THIS FAMILY INBRED OR WHAT?’ Ha, ha. So glad IMDB cleared that up.

Lothar races off to Stormwind, the human capitol city, then he’s sent to Goldshire, a nearby village. There is a two-second scene with a murloc (large frog-like creature) under a bridge as he rides across. Ooh, look, pretty griffin, and there’s Dalaran and that looks like that instance…

These fan-services for players that could have worked better with in-jokes and more consistency with the original material. I’m looking for familiar spells but Medivh is part-druid (he turns into a bird), none of the mages cast mirror image (giving themselves 3 likenesses and increasing their damage) although a young Kadghar casts ice block (a protective shield over himself, yay). Gul’dan, who should be a shaman, seemed more like a mage.

The story attempts to hook people in with characters: Durotan (Toby Kemmell who voiced Antonidas in Warcraft the game; this won’t be confusing at all) is motivated to protect his wife (Draka played by Anna Galvin), son and tribe. Draka dies protecting their son ‘Moses’ as he floats away on the river and disappears from the  story. Durotan becomes you’re average 2-dimensional male character whose wife was fridged and he’s nobly battling to save the orcs from themselves.

Then there’s the ‘romance’ between Garona (Paula Patton) and Anduin Lothar. Lizzie Bennett and Mr Darcy they aren’t. ‘Me half-orc, you single man, we mate’ is pretty much the size of it but without any sexytimes or even sexual tension.

And the end of the story?! Get me a hammer. I need to fix this bluray disk. Is Garona supposed to be Jon Snow? TRY ADDING SOME MOTIVES. AND A SEMI-CONVINCING REASON THAT WOULD WORK. Hell, any reason for that trick to work would have been an improvement. Argh.

Like Moon, Warcraft was a bit too long and rather ambitious. Unlike Moon, Warcraft doesn’t have an intelligent story. Feedback suggests that painting both sides of the human-orc conflict as sympathetic was Warcraft‘s downfall but I disagree. In recent expansions, Horde (orcs) and Alliance (humans) have had to work together to defeat common foes. Players choose sides but often play characters on both sides (not without betrayals). This time the common enemy was Gul’dan and his fel magic; this could have worked with more focus on characters, nuanced conflict, sexual tension… Step one: Warcraft needs to justify Garona wanting to join the Alliance apart from wanting her freedom while she plots her escape.

Warcraft passed the Bechdel Test. Women actually talk to one another. They have some power and some agency. I’m not saying the movie is balanced gender-wise but it makes an effort, especially considering the source material and player base.

Overall, Warcraft is a pretty movie. It tries to engage the players but falls down with its inconsistency, lack of humor, slow pacing, poor tension and lack of immediacy. ‘And lack of murlocs,’ says the minion. The movie tries to engage people new to the story but falls down with the lack of humor, lack of engaging characters and a plot that plods to a fart at the finish.

Warcraft is a box-office smash in China. I predict a sequel. Let’s hope it has a more engaging story. 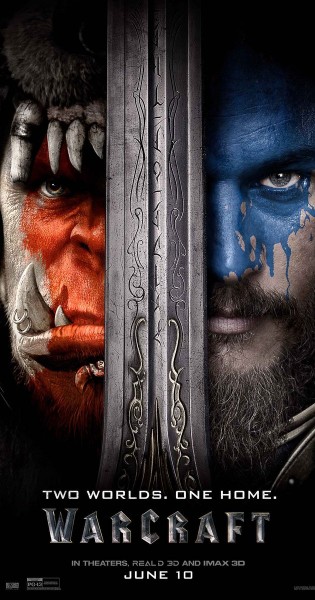