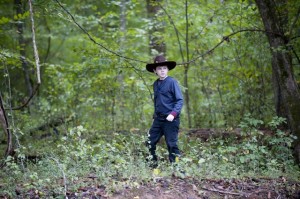 Dale (DeMunn) tries to talk to Daryl about the group and its descent into torture and possible murder. Daryl reveals he has no hope for the group describing it as broken.

Carl (Riggs) visits Daryl’s camp and steals his gun. He wanders into the woods and finds a walker stuck in the creek. Carl begins antagonising the walker by throwing rocks at it. Upon Carl getting too close, the zombie frees itself from the creek and Carl flees.

The group meets to discuss Randall’s fate. Dale is the only person fighting for the outsider’s life. After the argument goes back and forth several times, Andrea (Holden) becomes to only person to finally agree with Dale. He leaves the group to perform their task and goes for a walk.

When Rick (Lincoln) is about to perform Randall’s execution, Carl walks in and eggs his father on. Rattled by his son’s bloodlust, Rick demands Randall be taken away.

The episode ends with Dale finding a disemboweled cow. When investigating he is attacked by the walker Carl inadvertently freed earlier. The group respond to Dale’s cries and Daryl kills the walker, but it has already ripped Dale’s torso open. Daryl shoots Dale in the head to end his suffering.

It has been a long time since the death of a television character has affected me so much. I have been shocked by deaths on Game of Thrones and was saddened by Emily’s death in Criminal Minds. Dale’s death achieved both shock and sadness. With the group’s conscience and heart now dead, what will become of our intrepid heroes? Will they kill in cold blood to protect their own? Will they be able to live with their actions? Will someone PLEASE throw Shane to a zombie horde?! Ahem.

The possibilities stretching before the group are boundless. Onward to episode 12.