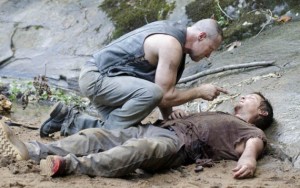 [Spoilers, Sweetie — review contains a synopsis of the episode]

‘Chupacabra’ begins with a flashback to Shane (Bernthal) and Lori (Callies) watching from a distance as the streets of Atlanta are napalmed.

Back in the present, Shane and Rick argue about the futility of their searches while searching for Sophia. Shane feels that Rick is risking the group for one child when they should be focusing on the safety of the remaining group. Rick isn’t quite so willing to give up on Sophia. The two men return to the farm noticeably irate.

Meanwhile, Daryl has borrowed one of Hershel’s horses to search for Sophia. The horse gets spooked by a snake and throws Daryl down a ravine into a river. During the fall Daryl is impaled with one of his own arrows. He binds his wound and attempts to crawl back up the ravine. When this fails, he lies at the riverside and hallucinates his brother Merle giving him backhanded encouragement.

Tensions rise between Hershel and Rick when Hershel feels Rick’s group are not respecting the rules of his farm. Rick manages to calm the issue for now, but a definite rift is forming.

Andrea is keeping watch from the RV and alerts the group to a walker coming out of the trees. Rick and Shane approach and realise it’s Daryl just as Andrea takes her shot. The bullet grazes the side of Daryl’s head and he is taken in for medical attention from Hershel.

The episode ends with Glenn giving Maggie a note during dinner asking her to meet him in the barn’s hayloft. Maggie doesn’t read it in time to stop Glenn from discovering a horde of zombies locked in the barn.

Another enjoyable episode from The Walking Dead cast and crew. Character relationships are still fluctuating and it’s interesting to wonder where they’re going to end up.

Characters like Shane, Hershel, and Andrea evoke strong negative emotions, while characters like Glenn, Daryl, Rick, and Maggie are very likeable. At this point in the show anyway … dun, dun, DUUUN!

There are very few wishy washy characters that don’t elicit a strong emotional response, but they are there. Luckily for the plot and the viewers, they’re often shoved to the background.

‘Chupacabra’ was a solid episode with few zombies but excellent interaction between the main characters.

“I shot Daryl.”
“Don’t be too hard on yourself. We’ve all wanted to shoot Daryl.”