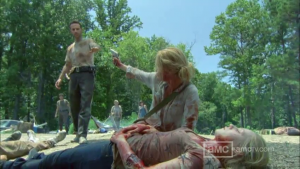 A distraught Andrea (Holden) holds vigil over her sister’s body while the rest of the camp ensure their dead don’t rise. Rick tries to reason with Andrea but she pulls a gun on him. Amy eventually rises from the dead giving Andrea a chance to apologise for not being there for her in life. Andrea shoots Amy in the head.

Jim (Rothenberg) is found to have been bitten during the attack. The camp is divided as to whether or not to kill Jim. Daryl (Reedus) is outnumbered so Jim lives (for now). The debate then turns to whether the survivors should head to the CDC or a nearby military base in search of a cure for Jim. The camp decides to follow Rick’s (Lincoln) instinct and head to the CDC. Only Morales and his family decide not to follow the rest of the survivors, instead heading to check on nearby family.

When Dale’s (DeMunn) RV breaks down the caravan stops. While Shane (Bernthal) goes on ahead to a service station for the parts Dale’s RV needs, Jim begs the rest of the survivors to leave him on the side of the road. After a short discussion, it is decided to grant Jim’s (un)dying wish. They say their goodbyes and drive away, leaving Jim leaning against a roadside tree.

We are introduced to Dr Jenner (Emmerich), a scientist at the CDC, and witness as his work on a cure is destroyed due to an accident in the lab. The doctor films himself in an attempt to communicate with other scientists and admits he is contemplating suicide.

Rick and the survivors arrive at the CDC. The episode ends with a reluctant Dr Jenner opening the lockdown of the CDC for the disheartened survivors.

Yet another great episode from The Walking Dead crew. My only criticism of this episode is killing Jim in a dramatic way that could have been earth shattering before developing the character to a point where viewers would really feel the loss.

Other than that minor point: solid work, solid episode, solid season so far with only one episode remaining.

“Do not enter the city. It belongs to the dead now.”