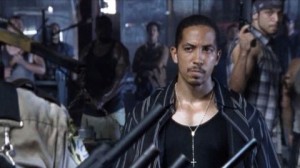 ‘Vatos’, this episode, begins with a heartfelt moment between sisters Andrea (Holden) and Amy (Bell) while fishing from a boat then we’re taken back to the city with Rick (Lincoln), Glenn (Yeun), T-Dog (Singleton), and Daryl (Reedus).

Rick et al follow Merle’s trail of blood from the rooftop to a kitchen where it is evident he has cauterised his arm and escaped out onto the streets. The group aren’t willing to look for him without the bag of guns that Rick dropped on his first trip into Atlanta. When they formulate a plan to retrieve them, they don’t anticipate on encountering a group of seemingly hostile survivors using gang-type tactics.

Glenn is kidnapped and the remaining three men somehow end up with one of the members from the enemy side. The gang won’t trade their member for Glenn though unless Rick et al give them the gun bag (and obviously the guns it contains).

The standoff is resolved by an old woman who comes in and asks for the second-in-command’s assistance with an elderly man suffering an asthma attack. The gang is no gang at all but a group of young men who are protecting a nursing home full of frail and elderly residents. The leader of the group used to be the custodian but only he and his second-in-command (previously a nurse at the home) stayed after everyone else ran away. Everyone seems to be looking to him.

Rick, T-Dog, and Daryl leave with Glenn after giving the other group of survivors some of their guns only to discover their van is missing. The group quickly deduce that it could only have been taken by Merle. They hurry back to the camp knowing that Merle will be headed back to seek his vengeance.

Meanwhile at the camp, Jim (Rothenberg) has been digging giant holes due to a dream he had but he can’t remember why the dream inspired him to dig the holes. The episode ends with Jim remembering why he had to dig the holes after zombies have descended on the camp. Rick et al arrive just in time to help fend off the zombie invasion, but it is too late for many of the camp including Ed (Minarovich) and Andrea’s younger sister Amy (Bell).

This show just keeps getting better the more episodes I watch. I’m glad to have waited until there are a few seasons available to watch The Walking Dead because the cliffhangers have so far all been doozies!

“The people here, they all look to me now. I don’t even know why.”
“Because they can.”