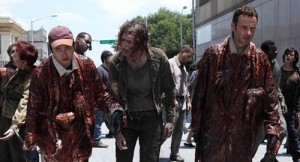 At the beginning of this episode it becomes clearer that Rick Grimes’s wife Lori (Callies) and partner Shane (Bernthal) are involved. By clearer, I mean they have sex in the woods.

Picking up from where we left him last episode, Rick (Lincoln) is guided out of the military tank by the voice on the radio. Once they have reached a relatively safe position, Rick introduces himself to his saviour, Glenn (Yeun).

Rick is led by Glenn to a group of survivors who are holed up in a shopping centre. The shopping centre has been surrounded by zombies as a result of Rick’s attention-seeking in the first episode. Among the survivors is also Merle Dixon (Rooker), a white-trash racist bully, who is quickly put back in his box by Rick. This box involves being handcuffed to the roof of the shopping centre.

After exhausting all other routes of escape from the shopping centre hedged with zombies, Rick and Glenn are covered in zombie guts so that they can blend in with the crowd of walkers and get to trucks at a nearby construction site. The get a truck and manage to pick up the other survivors using diversion tactics, but Merle is left handcuffed to the roof after T-Dog (Singleton) accidentally drops the key down a drain.

The episode ends with the group of survivors heading back to the camp. The same camp of survivors in which Rick’s wife, son, and partner reside.

This episode was a lot of fun. I’m thoroughly enjoying the humour injected into the show and laughed out loud a few times, especially at some of Glenn’s comments.

I loved the portrayal of Merle Dixon by Michael Rooker. The character only has a few scenes, but manages to show so much. Mostly ignorance and intolerance, but there are a few moments where the glimmer of something more intelligent and deeper shine through.

Ensemble shows are often difficult to follow as twenty different important characters are crammed into the first few episodes. However, with The Walking Dead I have yet to feel overwhelmed with the introductions that have been made. Everyone is given a brief introduction and then they are nestled back into the story to wait for their big moment.

“Why don’t you pull your head out of your ass? Maybe your headache will go away.”