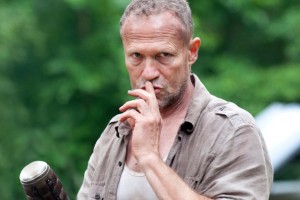 ‘Walk With Me’ begins with a helicopter crash witnessed by Andrea (Holden) and her companion, Michonne (Gurira).  They head towards the crash to investigate and Andrea is obviously still very sick.

Cars arrive and they hide in the shrubbery. Michonne is forced to decapitate her prisoner zombies as their chains attract the attention of the car’s occupants. The new arrivals kill the dead helicopter occupants, horrifying Michonne and Andrea who are not yet aware that everyone turns when dead.

A man holds Michonne and Andrea at gun point from behind and tells them to drop their weapons. This man turns out to be Daryl’s brother Merle (Rooker) from season one. Andrea and Michonne are blindfolded with the surviving helicopter occupant, Lieutenant Wells, and taken to a camp.

The man in charge of the camp, known only as The Governor (Morrissey), explains the zombies rising without being bitten to Andrea and Michonne then takes them on a tour of the town’s defences and the community aspect.

Lieutenant Wells explains to The Governor how he and his comrades ended up in the helicopter. The soldier tells him about the rest of his unit who remained at a safe location awaiting their return. The Governor promises to bring them home if they are still alive.

The Governor goes to the location under the guise of retrieving the rest of the National Guard unit but ends up ambushing them on their own territory and slaughters the entire unit. The Governor and his men return to their community with scavenged supplies and self-promoting lies.

Andrea falls for The Governor’s charms and lies but Michonne is not convinced.

The episode ends with The Governor brooding in a secret room within his house containing a wall of decapitated zombie heads.

Wow, what an episode. The Governor starts off as someone too good to be true and is he ever! He has the potential to become an intricate character with seriously muddied alliances.

Early in the episode, I kept waiting for the switch back to what is happening with Rick and his game. When I realised that wasn’t going to happen I was a little bit disappointed; however, the devil’s advocate in me pointed out that it gives the episode an unencumbered chance to explore a new setting and new group of survivors. As we’re introduced to the new aspects, we still have the familiar grasp of Andrea and the less familiar but still known Merle and Michonne. But the introductions are not clouded by the full cast’s presence and distraction. Very well done.

After season two’s stagnation and repetitive nature, season three has been a great relief so far.

“Now, how’s about a big hug for your old pal Merle?”