The Walk of Punishment is a parade in the slave city. Daenerys walks along it while considering what to do about the Unsullied: should she purchase them? With what?

When she sees a slave hanging on a cross, his body covered in slashes from a whip, she attempts to give him water but the slave refuses, telling her to let him die. The mere concept of slavery disturbs Daenerys but this sinks deeper.

Melisandre, the Red Woman, is leaving Stannis to his own devices, refusing to have sexytimes with him because ‘your fires are burning too low’. She also won’t tell him where she’s going or how long until her return.

Rob and Catelyn Stark and company return to Riverrun for Catelyn’s father’s funeral, which is held somewhat differently to the book although they still send the body off on a boat and fired arrows at it that miss. Three times. Then another guy shoulders the failure out of the way to fire and hit the boat, which then bursts into flame.

The failed marksman is, apparently, also a failed general in the war because he didn’t follow orders, resulting in Rob Stark’s side snatching defeat from the jaws of victory. Robbie gave him a real bollocking.

In the previous episode the Brotherhood Without Banners was going to let Arya go until they brought the Hound into the inn. The Hound demanded to know what they were doing ‘with the Stark bitch’ after which the Brotherhood won’t let her go. However, they let Hot Pie stay at the inn and give Gendry a job fixing their armour.

Samwell and the other brotherhood arrive back at Craster’s hall, begging food and shelter. I don’t understand why they are so afraid of Craster in the circumstances: it’s not like Craster and his wife/daughter/granddaughter harem could stand up to a group of armed men. Instead of standing up to him, they whine about the gruel he gives them while Sam watches Gilly give birth to a world of trouble. I mean, watches Gilly give birth to a boy who Craster will want to sacrifice to the Others (the zombie masters).

Greyjoy, idiot that he is, tries to escape. Knowing what’s coming, I keep cringing. Still, I don’t remember Bolton’s men threatening to rape Greyjoy in the book. I guess pulling down his pants to expose his butt could have been intended as a means of balancing the scales.

However, the scales remain completely unbalanced. Tyrion, Bronn and Pod go to Littlefinger’s brothel to collect the treasurer’s books because Tyrion has been appointed Keeper of the Purse or whatever George R R Martin calls it. Pod loads the books onto a cart while Tyrion and Littlefinger talk but the camera mostly focuses on Ros’s breasts, which are threatening to escape her skimpy bodice.

While they wheel the cart through the brothel, women walk around half-naked, baring lots of boobs and butts. All the men seem fully dressed.

Nice naive Pod can’t take his eyes off all the succulent mounts of flesh.

Tyrion hits upon a means of rewarding Pod for saving his life: he provides sufficient gold to employ three skilled sex workers for Pod for the afternoon. Cue half-naked women performing for the camera, including a prolonged shot between one woman’s legs. She’s wearing a thong. If you can call something so insubstantial a thong.

The flesh is completely over the top, probably intended as a consolation for the ‘deprivation’ certain viewers felt when watching the previous episode.

When Pod returns to Tyrion, giving him his unopened purse because the sex workers refused payment, Tyrion and Bronn’s reaction is hilarious. It makes the previous objectification of women slightly less unpalatable but only slightly. The same affect could have been achieved, more story could have been incorporated into the 56 minute episode, if they’d implied more and explicitly dwelt less.

Jaime, that brilliant tactician Brienne was trying to take safely home to his family, is now a captive of the soldiers of the North thanks to his attempts to escape his escort. A prisoner of Roose Bolton, to be specific. Anyone whose emblem is a flayed man has got to be a psychopath.

Jaime warns Brienne that Bolton’s men will try to rape her and advises her to let them. She challenges him. And the rapists.

It’s during this book and this season that I start to find Jaime Lannister appealing as a character. Although his relationship with his twin sister is repugnant as is his reaction to Bran seeing them having sex (attempted murder), in this season Jaime reveals a better nature. Sometimes.

In contrast, in the first book I found Cersei to be repugnant (because incest) but, as a villain, she was somewhat admirable: she would do anything to protect her family (of whom her husband was not one) and she was a formidable politician. So far this season she’s lost control of the crown, taking second place to her father with scarcely a complaint. However, she’s scathing towards Tyrion whom she despises and Margery whom she perceives as a threat to her influence over Joffrey and the crown. Cersei’s battles descend into the petty.

Game of Thrones is violent; when it comes to Theon Greyjoy, the violence goes past what you might expect from a patriarchal fantasy based on the historical One Hundred Years War. Rape and threatened rape — threatened to both sexes — is, at least, equitable. A woman and a man were both threatened in separate incidents. I’m not sure that this is a good thing. As the series gets darker, it’s harder to watch. However, I need to follow my favorite characters: Tyrion Lannister, Jon Snow and Arya Stark. If they all end up dead — we are talking about George R R Martin’s work here — then… [shrug]

The minion says, ‘That last scene should be cut. I’ll give them a hand though, it was good acting.’

He’s sleeping on the couch. Puns like that deserve a walk of Punishment. 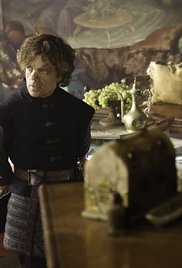