“Romeo, Romeo, wherefore art thou Romeo?” quoth Juliet, who’s writing the play (not THAT one) in 2083 to exorcise the ghost of the comatose Romeo. However, Heathcliff Ellis has come from the past to the end of the world to 2083 to complete her story by waking Romeo.

How to describe this Literary time travel book? Would a book by any other name inspire such devotion from reviewers? How many really bad misquotes can I insert into a book that, for the most part, sprinkles literary references but, IN THE CONCLUSION, CRAMS THEM IN CHEEK BY JOWL?

Kathryn Barker has a PhD in fan service, awarded – if by no one else – by Dark Matter U.

Anyone who knows my literary tastes knows that I loathe everything I have read that the Bronte sisters wrote. This includes Wuthering Heights. Seriously, as a young adult I read a lot of Literary Classics to educate myself. I loathed most of them. Lark’s Rise to Candleford’s strength is that it only references Lucy Snow and is NOT one of THOSE books; instead of being maudlin, it’s just TEDIOUS. (I had an ancient copy, possibly one of the Early Editions, but I don’t recall finding it after the move. Perhaps it’s one of those 19th century books that I lost, but, in this case, the “losing” would not have been accidental. At best it would have been a Freudian style error.)

The above exposition is to explain that I loathe All Things Bronte and yet I still enjoy this story. It’s not necessary to know or even like Wuthering Heights or Emily Bronte’s history, although doing so would probably increase one’s enjoyment.

Juliet – Jules – writes the play as a form of therapy while Romeo is in a coma. Shakespeare did not write this play in this novel, although there is some discussion about potentially popping back a few hundred years…

I LOVE the way Barker effectively re-wrote the original while “writing” the original. She absolutely could NOT do better regarding the relationships. I give her a standing ovation.

Barker’s representation of disability and other differences is positive, constructive and well thought through although having the option of “healing because science” does add complications.

Jules’s left arm – her dominant arm – is paralyzed, a side-effect of extreme medical intervention to save her life after her attempted suicide. (The play is a glossy version of Jules’s life prior to the book opening.)

Post-suicide attempt, people in Jules’s life tend to be split into two groups: walking on eggshells between lectures and admonishments to grow up on the one hand and hostile peers, many of whom mock Jules’s disability.

Jules is not enamored with herself and is deeply ashamed of her disability. However, her “hero’s journey” includes engaging with issues of difference and a burgeoning self-acceptance. I applaud this.

What is problematic is that – due to timey wimey stuff – medicine could cure the paralysis. This is problematic, especially how it’s portrayed as a cure without risk, leaving disability as a choice. Many people believe that disability is a choice, that – for example – wearing glasses or surgery magically rectifies all vision impairment yadda yadda. And many people are hostile to the thought that disabled people might reject a cure because of personal identity and/or because of the risk.

For example, an ophthalmologist turned hostile because I refused surgery that could, at very best, give a very minor benefit (reduce my nystagmus, the flickering of my eyes) but with risk because the surgery involved cutting some of the muscles to my eyes. His hostility and refusal to engage with the reality of my disability by, for example, refusing to write a report on my eyesight after I refused surgery, meant I had to find a new specialist. None of that is directly relevant to Waking Romeo except in that medicine becomes a magical cure-all and disability becomes a choice in the dominant discourse – and in that ophthalmologist’s mind.

In my opinion, Barker reclaims Emily Bronte’s Heathcliff while herself portraying the “real world” Heathcliff as an admirable person.

Personally I loathed Wuthering Heights so much that I’ve blocked most of it out of my mind. All I specifically remember is that scene where they run towards each other across the moors while calling their names? Did. Not. Happen. I felt so ripped off!

My mental block saves us all from another rant so let’s just say Barker explores racial issues in Wuthering Heights and sets the people free.

(I must admit, after 30plus years and seeing so many people rave about it, I’m kinda wondering if I should give it another go.)

Waking Romeo is a kick-ass time travel story that is part Romeo and Juliet, part Wuthering Heights, part Hamlet and several other of the Bard’s plays, part Terminator franchise, part Doctor Who… I’m sure I’ve missed a few.

This novel is one of those rare stories that will inspire those who’ve previously shunned Literature – like Wuthering Heights – to actually read the books. And plays. Not only do I recommend Waking Romeo as a cracking read, it’s essential for high school English programs because it will inspire a portion of students to delve into the classics. (Poor souls.)

If you love literary references to Wuthering Heights, try Goth Girl and the Wuthering Fright by Chris Riddell; it’s actually aimed at a younger age group but it’s still fun and so are the drawings. 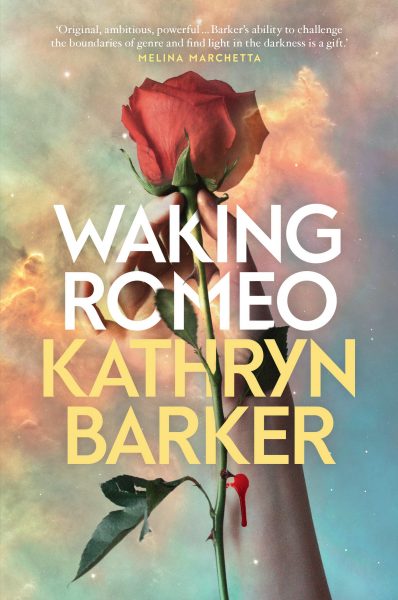