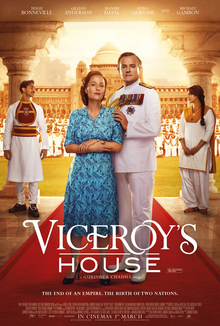 Lord Mountbatten (Hugh Bonneville) and family arrive in India to live in Viceroy’s House while overseeing India’s transition to independence.  Britain syphoned off India’s wealth and manipulated its society for three centuries. Therefore, preparing India for independence is a gargantuan task. Mountbatten’s wife Edwina (Gillian Anderson, Scully from the X-Files) passionately argues for social change like improving infrastructure to reduce the child mortality rate (half of all babies died before they reached 5 years of age). However, Mountbatten overrules her.

Violence breaks out, inciting Mountbatten to cut corners and accelerate the timetable for independence. He wants to avoid responsibility for the impending carnage and hopes to reduce fatalities by speeding up the process.

Jeet Kumar (Manish Dayal) is a newly arrived Hindu in Viceroy’s House. He procured a position through an influential employee from the same village. Aalia Noor (Huma Qureshi) was also from that village. Her Muslim father had been arrested. Jeet was a police officer at the time so he was in a position to help. He fell in love with Aalia. He is still in love with Aalia although she is promised to another.

When Indian servants bring out food for the Mountbatten’s dog, the women admire the dish, chicken, that they haven’t seen in ages because of British rationing. These aristocrats eat the ‘dog food’ to the consternation of staff. Their reaction was comedic. I recall tinned cat food friends bought for their cats when I was a young adult. Another poor friend and I admired that cat food and talked about eating it ourselves. It was fun to think of aristocrats actually doing this, even if it was fresh cooked chicken and not tinned cat food.

Viceroy’s House shows glimpses of real history recreated juxtaposed with fictional staff relationships demonstrating the subjugation Indians had endured, fears of the proposed conflict resolution and the powder keg upon which Britain sat. Although I knew the ultimate outcome of this story — Pakistan was created as Britain ceded independence to India — I did not know the real reason why. That reveal comes as a gut-punch.

Racism is prevalent in the story because this is history, a history in which Britains were still horrifyingly and openly racist. Romance and tensions between Muslims and Hindus on staff at Viceroy House are, if anything, more engaging because it is the Indian staff who are more engaging, better developed characters. However, I found it easy to forget the Sikhs were a third faction in India, because the movie emphasises Muslims and Hindus.

I am sceptical about Mountbatten’s ignorance regarding British intentions in dividing the country. However, he and his family stayed in India after Transition. They stayed to make amends, to try to help heal the country. This lends credibility to Mountbatten being duped.

The movie’s director, Gurinder Chadha, is the granddaughter of a woman who survived Transition as this era has become known, but her baby daughter died of starvation on the side of a road. This Transition was the world’s largest mass-migration. Millions of people died in the violence and because of starvation and disease.

Viceroy’s House is an intelligent retelling that uses renowned white actors to engage white audiences while educating us. The movie, like Transition itself, feels rushed with conversations and film recreations acting as textual exposition instead of showing us developments. Actors like Michael Gambon are under-utilised, their purpose to convey information dumps. Viceroy’s House presents an Indian Romeo and Juliet story while celebrating Ghandi’s leadership and the triumph of human decency. And yet the story also mourns violence and generational losses. Overall I recommend Viceroy’s House but I think it could have been better if allowed a longer run time.