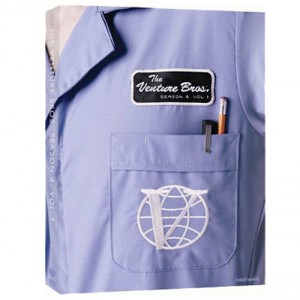 Dean and Hank are the Venture Bros, who live with their professor father and their bodyguard Sargeant Hatred, who used to be their enemy. Their home is a compound not far from what appears to be a neighbourhood of bad guys including Monarch, the head bee and his wife with the big breasts and very masculine voice.

The first episode was really weird, until I realised everything was out of sequence. By the end of the episode I figured out more or less what was going on, but it was quite a difficult introduction to the series. Later episodes ran sequentially so were much easier to follow. This was important as each episode ran multiple plots such as the one where the aborted clone made a skin suit to take his brother’s place, while the other brother was grounded and rebelling, leading to running over a corpse…

Venture Bros is an animated action/adventure/comedy/science fiction cartoon series that spoofs a lot of cultural icons. The teaser for episode one included a funny spoof of Raiders of the Lost Ark after the ark was opened. That was only the beginning. Other spoofs include Batman and Robin, which is of particular note because this included innuendo that may increase the rating of Venture Bros.