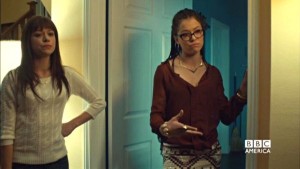 My first review of this series was Orphan Black s01e01: Natural Selection; if you don’t want episodes 1 and 2 spoilt, don’t read the review for episode 3, ‘Variation under Nature’.

The above image is the final scene from episode 2 and the beginning of episode 3, ‘Variation under Nature’. In episode 2, Sarah found Alison’s address — Alison is another doppleganger — so Sarah stalked Alison. Alison was frightened, threatening and pissed off, in that order, then she gave in and invited Sarah to her home to talk. After Alison hustled Sarah inside, Kasima appeared from the next room.

Kasima tries to talk to Sarah but Alison’s anger and fear prompt Alison to blurt out that they’re clones and someone is trying to kill them off. One of Alison’s children appears, wakened by the noise; Alison puts the child back to bed while Kasima talks to Sarah.

Felix, left in the car with Neighborhood Watch hassling him, becomes impatient. When he appears at the door, Alison nearly shoots him.

Sarah hands over the briefcase. Kasima urges Sarah to continue posing as Beth to help the clones’ investigation and to subvert the police inquiry that threatens to expose them all.

‘Variation under nature’ subtly begins exploring the nature–nurture debate. All the clones are played by Tatiana Maslany who alters accents, intonation, para-language and body language for every character. Each clone has a distinct personality: Sarah is the self-absorbed con artist acting out of self-preservation; Alison is a tight-assed housewife and Kasima is a dreadlocked PhD student fascinated by science. The message is clear: nurture plays a significant role in personality development.

Another action-packed episode with more searching, shooting and complicated relationships, Orphan Black is taking viewers on a wild ride. The overt focus is on the mystery of the clones; the stakes are life or death; every moment develops the plot and the characters. I highly recommend this rollercoaster ride.

My review copy of Orphan Black season 1 was courtesy of Roadshow.