Goody (Alicia Silverstone) and Stacy (Krysten Ritter) are BFF vamps who share the same apartment in New York, texting each other from their respective coffins during the day. Like Whedon’s Angel, they drink from animals not humans. They even belong to Sanguination Anonymous, a 12-step program for vampires who say ‘one drop is too much, a whole family is not enough’. To satiate their desires, after working as pest control (their source of food), they go out and get laid. Regularly. But Goody is getting tired of all this; after all, she’s been around since the 19th century.

Stacy falls in love with Joey Van Helsing (Dan Stevens). Unfortunately, Joey’s parents (Wallace Shawn and Kristen Johnston) have continued the family business and they’re not too happy when they notice Stacy’s pallor and cold hands.

Meanwhile, Cisserus (Sigourney Weaver) is causing problems for the ELF (Extended Life Form, we don’t like the V word) community by being inconsiderate and eating everyone in a Chinese restaurant. Cue stereotypical jokes. It’s consistent though, because when Cisserus orders pizza, it’s because she feels like a pizza guy.

Vamps reminds me of Love at First Bite (1979), another artery-clogging cheese-fest that had me cheering the vampire on back in the 80s. When I was a teenager. Before I developed actual taste. I’m not sure what my excuse was yesterday. Oh, wait, I know: I noticed an albino-type so I TOTALLY HAD TO WATCH THIS FOR MY THESIS. (Not that I knew about the albino type until about 55 minutes in to the movie but I won’t mention that.)

At about the 55-minute mark, STEMs — vampire-creating vampires — from all over the world attend a meeting at Sanguination Anonymous. I didn’t catch the name of the African albino-type vampire introduced as the STEM from Turkey. IMDB lists this actor as Mozi Zhuli without any personal information. Simple Movies shows a photograph of Mozi Zhuli and agrees with IMDB that he’s also appeared in The Double as a Russian spy, which would be surprising if the actor is African. I’m not sure if this character is played by Mozi Zhuli because I’m vision impaired so I’m working from online sources and a vague impression from the screen.

This vampire was done up to look albino-like (very pale hair and white skin) while the other vampires have a large range of hair and skin tone. The albino-type vampire is comedic only, adding no value to the plot, has no lines, and is not credited. However, he’s not a bad guy. The real bad guy is Cisserus (Sigourney Weaver) with her dark auburn hair. Other characters are shades of grey. Sometimes literally. The most disappointing aspect is that the albino-type vampire isn’t important enough to be properly credited or get any speaking lines. It would also have been awesome if they’d hired an actual PWA (Person With Albinism) to play the role instead of descending into crip-drag.

(Warning: if you’re not seriously disabled, never use the term ‘crip-drag’. Unless you’re the kind of douche who is white and refers to Africans as ‘niggers’, in which case you’re beyond hope already.)

Vamps is a cheesy, over-acted, overdone romantic comedy with hints of horror. I enjoyed it on an afternoon after I’d completed a training module, done a quiz, then fought a losing battle with a software program I need for uni. I needed a rest for my eyes and a break from cognitive processes then I was surprised by the albino-type character. In no way am I saying this is a good movie. Note my incessant need to distance myself from actually watching it. 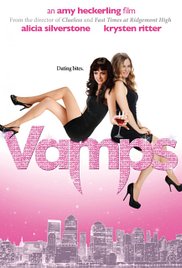