Recently I received Game of Thrones season 5 to review so I figured I’d better hop back to season 3 to start watching. It was in season 3 that I fell off the bandwagon for reasons nothing to do with the story: mostly hype, internet spoilers and having to wait so long to watch it legally because I’m not prepared to line Rupert Murdoch’s pockets.

Anyhoo, this season starts with ‘Valar Dohaeris’, which pretty much in tune with the storyline from the books. Samwise Gamgee — I mean Samwell Tarley — is on the waddle. I mean run. He’s fleeing zombies in a snow-driven wilderness. He approaches a hooded figure from behind… [cue suspense music] He finds a carefully posed headless corpse. Well, actually, it’s holding its head in its hands. I wait for the corpse to animate but NO! A sinister figure carrying an axe approaches Sam from behind…

Snow, the wolfie (NOT from The Tenth Kingdom), attacks the other before it beheads Sam. Sam crawls one way, Snow drags the monster the other way until — dun dun DUNNN — the Watch shows up and torches the monster.

Mormont asks Sam if he sent the ravens (messenger birds). You had one job, Sam, ONE JOB.

They start their hike back to the wall while Jon Snow walks into the camp of the King Beyond the Wall.

Ygritte remains one of my favorite minor characters in Game of Thrones. In this episode she’s being a ginger — Tim Minchin would be SO PROUD and would tell her she can’t play Hamlet because GINGER — and she’s giving Jon Snow a hard time. Not THAT kind of hard time. Not yet, anyways.

Rob Stark is keeping his mother prisoner and finding ways to publicly humiliate her. I wonder how many teenagers fantasize about doing this to their mothers?

However, Tyron Lannister features large. Season two dumbed down Tyrion’s role in saving Kings Landing in comparison to the books, giving more credit to his abusive father, Tywin Lannister, who rode in like the cavalry at the last minute while a minion attempted to murder Tyrion.

Tyrion’s face is scarred after the attempted murder but he’s not nearly so horrific as in the book where his nose was literally cut off. I wondered how they’d do Peter Dinklage up; his sexyman vibe continues.

Tyrion tackles his father. Tywin unleashes all his hatred and fury at Tyrion, abusing him for being born, for ‘killing your mother’ when he was born, for being a dwarf and for seeking solace from sex workers. I know what happens in the books so I’m biting my tongue, holding in comments like ‘HYPOCRITE’ so I don’t spoil the story for the minion. Plus I’m wondering if the TV series will sanitize later events, making Tywin more the hero as they did in second season.

One of the things I absolutely love about the books is how intelligent Tyrion is and, like Machiavelli, he achieves his political goals while manipulating people’s prejudice against him to work in favor of his (morally upright) ends that justify the means. There was a scene in the throne room in book 2 leading up to the battle for Kings Landing that was so Machiavellian that it cemented my love for Tyrion as a character and as a representative of the disabled community. I stopped reading to squee, squee some more, then absorb the scene before resuming the story.

Speaking of epic, I love the dragon we see on Daenerys’s journey to view the Unsullied (slave army) while she considers purchasing them.

The acting is superb, especially during the slave-viewing scene, with characters reacting and concealing their reactions.

Barristan Selmy rocks up to save Daenerys from a pretty enormous scorpion. What can I say? It’s pretty AND enormous.

Hardly an episode passes without a sex scene of some description: here we have Tyrion’s bodyguard, Bronn, having sex in a brothel only to experience coitus interruptus when Pod charges in without knocking. Perhaps that doesn’t actually count as coitus interruptus because we see boobs, plenty of time spent on the woman’s breasts, and yet another shot of her breasts with anticipation that Bronn will remove her loincloth with his teeth. The point? Game of Thrones needs its sex scenes or certain viewers may seek out other forms of stimulation.

I’m a cynic. With cause.

Sansa is chastely dressed while Littlefinger entices her to run away with him. Knowing what is to come in the TV series, knowing how this diverges from the books, I do not anticipate this plotline in the TV series at all. Sure, Sansa is annoying. But I wouldn’t wish her fate on anyone, not even t’other girl who her character has been conflated with for the purpose of the series. Besides [SPOILER DELETED]. I’ll get to that when the series does. Sigh.

The image below is Margery Tyrell talking to the orphans as part of her plot to become not just ‘a queen’ but ‘THE queen’. She’s a smart cookie but I just Do. Not. like her.

Overall, tension is high in Game of Thrones Valar Dohaeris. There are so many characters doing so much stuff that, at times, it’s difficult to remember who’s who, especially when all these middle-aged white dudes seem to look alike. And is that Jon Snow or Rob Stark? [eyeroll] I confess to being suckered back in to the story so now I’ve written this review I’ll just hop back on the couch for the next episode…

The minion adds that it’s visually stunning. In his opinion, ‘it’s great’. But what would he know? He’s just a minion. [pointed look] [Instruction to cue the video once he’s served the pizza he made] [I only need ONE plate. I can eat IT ALL because DELICIOUS] 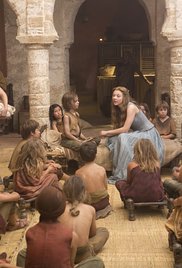