It’s that time of year again when I publish a magazine resulting from university assessment work. This short story, ‘Unmasked’ by Tom Dullemond, featured in this year’s PDF special edition, saving me from using Lorem Ipsom to fill the pages. Thanks, Tom! 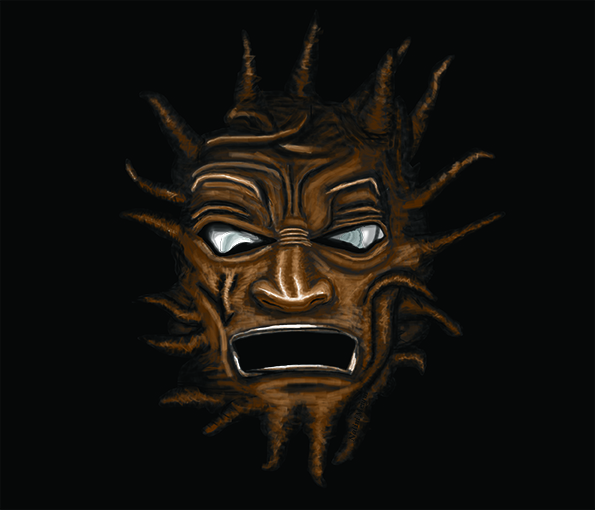 When the batteries ran flat and our daily supply of repacks and stale bread stopped coming, we plugged our guns into solar chargers and prayed for sunshine. The sky was muddy with chaff and dust but we had high infrared sensitivity on the panels; we eked out enough electricity to keep weapons and our augmented reality helmets charged.

Truth was, no-man’s land was wide for a reason: it was just the two of us with long range energy rifles and high tech headgear. We engaged the enemy before they even knew we were there, shooting out sentry mechs and anyone our tactical helmets flagged as armed or weaponised. They popped right there up onto our Heads-Up Displays, and with the one or two shots that we managed to recharge into our rifles each day, we killed or destroyed them.

Still, Geordie and I were only two humans holding this forgotten front. If a random enemy squad with more tech and bravado than sense pressed us they’d realise that two shots a day was about all we had.

I was putting on some lipstick, a ridiculous daily ritual that let me focus on normality a little, when Geordie called out across the field.

I looked up and got the little shiver of fear I always did when seeing the angry ogre mask on one of our soldiers. Red and black, glaring hatred at the world through bared white ceramic fangs.

I couldn’t see anything yet but then his vision was significantly better while wearing the field helmet. Our helmets calculated whether moving targets were just enemy robots or actual humans much faster than we ever could. We’d blown up a few of robots in our time: damaged dog-shaped mechs, draped with shredded supply bags and war-paint slogans, limping as best they could across fields whose e-markers were so scrambled they always came back to the same loop.

They’re in the Möbius strip death parade for the abandoned semi-sentient tech of war.

I flipped out my paper notebook and wrote that last part down with a real pen. Good shit for the memoirs. I picked my helmet up, ignoring the angry scowling monster shape of its face, and slipped it over my head.

Tiny shapes pinged on my HUD. Tagged on the display with thin red lines and scratchy icons, they moved cautiously from crumbling wall to blast crater at the edge of my natural vision.

No Logistics robo-dogs this time. This was a group of human-sized figures in a loose formation, about five of them. The HUD showed comms at back, heavy ordnance at front, regular infantry in the middle. About ten humanoid mech sentries trailed loosely behind them. My helmet marked those green. Unarmed, slow. We’d taken out dozens of them at long range over the past few weeks.

Ten mechs to five humans was an odd composition for a small squad, though. I figured they’d lost most of their team in an earlier encounter.

What the hell were they doing here? This was supposed to be a no-go area, bombed out, total EM deadzone, what with all the shit in the air. We picked off the stragglers who didn’t know, or the mechs that couldn’t know. What was going on?

Geordie hurried towards me through the trench we’d dug in what was once a street. We rendezvoused next to a burned-out auto-cab he’d jokingly called ‘Johnny’ after some SF movie from the ’90s, keeping our heads down. Johnny was our unofficial equipment station. We’d laid our IR solar panels out around him like black prayer mats. Empty rifles lay wired to them, sucking at the heat of the sky. I’d put a torn cap on the fried CPU unit of the auto-cab, and at night we talked about Johnny like he was our commanding officer and we’d half-salute that blob of a head.

On my Helmet HUD Geordie’s fearsome ogre’s face helmet was invisible, just a smooth grey dome. Instead of ridged eyebrows and teeth, bristling horns hiding Friend-or-Foe data tags and telemetry sensors, my helmet drew a digital hood over his monstrous fixed scowl. I couldn’t imagine what it was like for the enemy to face a whole squad of us, all masked rage and deadly accurate lancing beams of fire.

“Definitely live contact, Ma’am.” Geordie’s voice was clear through my headset now that we stood closer. “I don’t know why they’re coming through here. Their long-range comms must be down too. There’s tinfoil chaff everywhere up there.” He waved at the oil-smudge sky. “No signal’s getting through this flak mess for me, doubt it’s any different for them.”

We didn’t have a lot of power left in the guns, not enough to take them all out. If we didn’t manage to frighten them off soon they’d be hard to keep away. It wouldn’t take much to rout the two of us if they got close enough.

“Geordie, I can use my helmet battery to power your rifle.  That should give us an extra shot or two and only one of us needs targeting assist. If you take out a few of those helpless sentry mechs and then try to hit the comms guy they might think we’re dug in heavier than we are, give them a good scare.”

“Good idea,” he said. “There’s another path out to the north. If we’re lucky they’ll head off that way and give us time to recharge the batteries.”

I pulled my helmet off, trying not to flinch at the dis-augmented sight of Geordie’s demon-faced mask. It was a face that hated the world.

Glancing out across the no-go zone I could just make out the enemy, edging between the jagged edges of bombed homes and cars in the distance.

I powered down my helmet and pulled the battery out, splitting the custom casing to remove the universal power cell. I grabbed one of the handful of rifles charging nearby, unplugged its battery and reversed the process. The little power indicator filled up to the last yellow bar, which was better than nothing, but not by much. I handed the rifle to Geordie.

“I’m taking out one of the mechs first,” he said. “Should be easy as—”

His voice trailed away in that moment between breaths when the rifle’s sensors line up with the helmet targeting. He pulled the trigger but nothing happened. The whole tense death mobile was live but waiting for the machines to agree on success.

A line of white fire hissed across the field and one of the mechs dropped, seared right across the faceplate.

The group scattered but Geordie didn’t react. He lined the rifle up to the next mech and said, “They’re scrambling for cover. I can get another—”

The rifle lanced across no-man’s land again and struck a second mech in the leg. It collapsed, dropping out of my line of sight behind some rubble. I felt the absence of my monster-helmet augmentation, the sting of tactical ignorance. If not for the screams the battlefield would’ve seemed empty.

“What the—?” I pulled a set of discharged binoculars from the equipment pile, trying to fit them to my eyes where normally they would be pressed against a helmet.

Geordie, cool and calm, put his rifle down and picked up the next one, checking the battery pack and charge, flicking through some of the base calibration settings.

I finally got the binoculars aligned and adjusted the focus manually.

The five enemy soldiers lay flat to the ground, pressed behind makeshift cover of exploded brickwork and scanning their surroundings for us to no avail. But the sentry mechs… I couldn’t see a single one. Instead, several civilians cowered behind crumbled walls, just ragged locals. A bag of clothes and dry-pack rations lay burst and scattered between them. One, the screaming one, crawled towards the relative safety of a burnt-out car chassis, a leg dragging uselessly behind him. A second lay motionless, face scorched black and featureless.

“What the fuck?” I reached over and grabbed Geordie’s shoulder as he set his rifle to it. “Stop! Stop! Take it off!”

He turned his ogre face towards me. “What?” His amplified voice was a resonant growl from inside.

“No Ma’am, they are. Clear as day on my HUD.” He turned his hideous face back to the targets. We were too far away for the soldiers to fire at us, even if they did spot Johnny’s little altar; that was the whole point. It was just the two of us on the edge with long-range rifles. Safely at long range, where we couldn’t get unaugmented visuals on the targets. In an area where we couldn’t get satellite and drone confirmation. Where we just had to trust in the information our high tech masks threw at us.

Geordie fired once more as the hideous realization tingled up my spine. His rifle squealed at him, flashing battery warnings. He put it down and reached for the next.

I snatched it to safety before his fingers curled around the stock.

He glared at me with his hideous face. “What?”

He stared at me while the screaming weakened.

Geordie removed the demon helmet and was his regular self again; just a young guy but prematurely aged: wrinkles in his long face; faded blue eyes; greying stubble. Human. He looked out at the targets, frowning, then squinting.

“Where the hell is that screaming coming from?”

“The targets!” I yelled. “The godsdamned helmets are lying to us. They’re misclassifying civilians. Here.”

I handed him the binoculars and he was about to put his monster-head back on when I stopped him. “No. Naturally, unaugmented.”

He gave me a questioning look but shrugged and put the clunky device to his eyes. We’d been through a lot in the last few weeks and this was hardly the strangest request I’d made of him in that time.

Geordie put the binoculars down and said nothing. He pulled the helmet back on his face, becoming a monster again. He lifted the binoculars and they whirred into life as they drew power from his helmet.

“They’re— They’re mechs,” he said slowly, his voice amplified again. “I can see the metal plating, and one of them has sparks coming out of its head.”

“We’re fucking monsters,” I said to the monster. “Take it off. Fuck. Take it off.”

Geordie struggled free from his helmet and threw it away from him like it was poisoned. The red and black ogre, now decapitated, rolled down the trench and came to a rest, glaring at the indifferent sky.

“I’ve taken out at least thirty sentry mechs in the last two weeks,” he said, his voice flat, staring at it.

In the distance, a gunshot barked out and the screaming stopped. The sky smeared grey and careless in all directions above us. We, insignificant, were the only evidence of humanity in those frozen ruins.