Hooray! An episode NOT written by the Grand Moffat.

As of days of yore, like during the Tom Baker era, ‘Under the Lake’ opens with a group of people — scientists — in an underwater base doing their thing (research) when everything goes to hell. A gentleman (haha), presumably from the 19th century, appears and haunts the crew. He gets nasty. As in, fatally nasty. Anyone who dies also becomes ghosts.

Then the Doctor and Clara arrive. And things get more wibbly-wobbly.

Some key questions remain to be asked: Why is the first ghost such an anachronism? Why did the TARDIS land there if she didn’t want to be there AND that destination wasn’t their intended goal? However, Doctor Who rarely has faultless plots so we’ll rush by these while we’re running from ghosts who can pick up sledgehammers and starting banging away.

‘Under the Lake’ reminds me of many Tom Baker stories from my childhood including scientists on an alien planet left as husks by a ghost-like monster that emerged from a pit, lots of robot stories, that one with the lighthouse and the monster that looked like half-melted foaming jelly… I can’t remember any episode names but I do remember the stories after endless ABC reruns. This story, with it’s mild horror themes guaranteed to scare some children, fills me with warm fuzzies because it’s like the Doctor Who of my childhood: more story-focused, more situation-focused, and less TA-DAH! IT’S THE DOCTOR. AND CLARA. Oh happy day.

(I might admit to a teensy bit of snark if pressed.)

‘Under the Lake’ part 1 concludes the first disk of season 9 from Roadshow. I highly recommend this story to all the Tom Baker Doctor Who fans and fans of Classic Who in general, to New Who fans and families training their children up in the Ways of Doctor Who, Science Fiction and Horror. 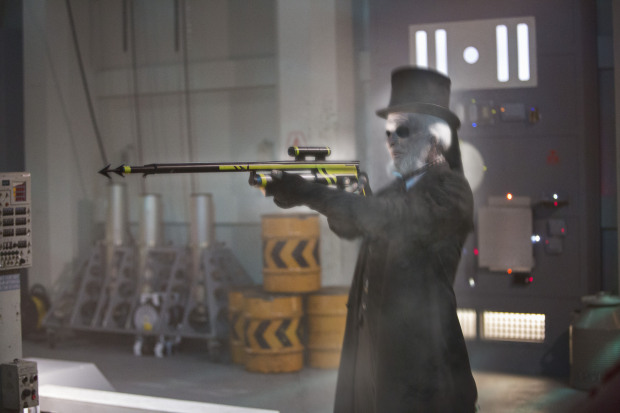