The recap is epic, jumbling up the previous 3 seasons. IT’S NOT IN CHRONOLOGICAL ORDER. Trigger warning for all OCDs.

Tyrion waits to meet the Dorn representative on the road but, when the Dorn entourage arrives, he learns the second son has come instead of the crown prince and the second son has gone ahead. When Tyrion finds the not-so-little prince, they have a polite yet barbed conversation bringing everyone up to speed on how Rhaegar Targaryen married a princess of Dorn only to throw her aside for another woman, start a war that ended with the princess and her children brutally murdered by the Mountain, presumably under Tywin Lannister’s orders.

And you thought your in-laws were bad.

I could be mistaken but I thought Cersei’s daughter went to Dorn as a hostage in the equivalent of this book. However, she’s long gone from Westeros at this time.

Tywin orders Jaime to leave the King’s Guard to rule over Casterly Rock. Jaime refuses so Tywin disowns him but he still gives Jaime one of the two swords forged from Ice, Ned Stark’s sword.

(The picture below is of Daenerys with one of her dragons because DRAGON. And two swords? Boring.)

Jaime tries to reunite with Cersei only to find she’s not interested because he took too long. In my opinion Cersei only wants to see herself reflected in her lovers, which is why she fucks family and she’s disgusted by Jaime’s new disability.

Brienne is epic, arguing with Jaime about keeping Sansa safe.

Jon Snow faces the music with the Crows who say they won’t execute him today although some on the council want to.

The Wildlings lurk near Castle Black. Another band joins the group Jon travelled with and these dudes are nasty. They eat crow. Not the feathered nor the figurative kind.

Sansa refuses to eat in spite of Tyrion and Shae urging her to care for herself. Shae tries to seduce Tyrion but he’s too anxious for a roll in the hay or even one on his four-poster bed.

Oleanna Tyrell is her usual epic self.

Joffrey is a dick and, this time, he’s a dick to Jaime, taunting him about his disability and age.

Arya rides with the Hound then rushes in to rescue Needle, her sword — because that’s more important than trivial things like STAYING ALIVE. The guy who stole her sword is really happy to see her. Not.

Daenerys flirts with Daario after trying to discipline both Daario and Grey Worm. The discipline might have more effect if she didn’t flirt and accept posies of flowers in front of her army. The dragons are getting bigger and the black one is scary, he even frightens Daenerys.

It’s Game of Thrones season 4. Trying to revive our dim distant memories of season 3 and the cast of hundreds in the space of 60 minutes is a big ask so not much actually happens, it’s more of a “remember this person? And this one? And these?” The best bit is the dragons, which is really early in the zode. 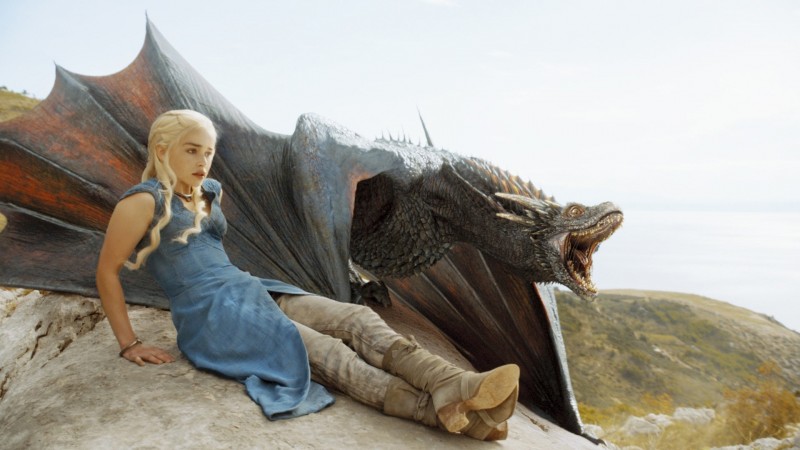