Raven comes in for a landing; with the whole planet to crash land on, she manages a site not too far from the 100 settlement.

Clarke and Finn just had sexy times in the bunker and they seem pretty happy. Ray is Finn’s girlfriend, though, so things are about to get complicated.

Bellamy is roused to see the landing pod. He’s in bed with not one but two girls: it looks like it’ll be a Mormon-type settlement. At least, it will be for the privileged.

Bellamy tells everyone else to stay put while he confesses to Clarke that he attempted to murder the chancellor to procure a place on the 100 drop ship. He finds the pod first and sabotages the radio.

The Chancellor decides to abdicate to join the 320 people to die so the others may live.

Abigail digs out her husband’s video outing the council’s coverup and adds a more current message at the end. The result? The best and most noble people volunteer to join Section 17 to die so others may live. Apparently 100 people were vetoed because they were deemed to be essential personnel. Finally Marcus Kane becomes more human, less narcissistic in his motivations: he argues with the chancellor to stay and continue to lead.

The juxtaposition of people lining up to die while the 100 race to offer them hope is powerful; twilight’s last gleaming refers to the possible twilight of the human race, of the people volunteering to die so others may live, of the time of day the 100 try to contact the station. I’m pleased how this episode ended: I was concerned the outcome would be reduced to sentimental claptrap, unrealistic in the situation. Kudos to the writers! 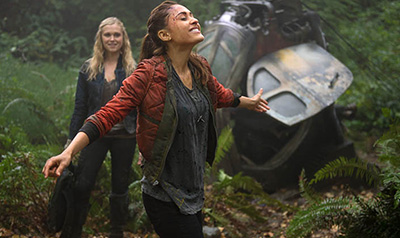