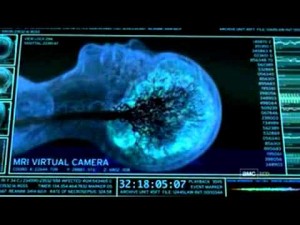 The episode begins with a flashback to the start of the zombie outbreak and Shane’s (Bernthal) failed attempt to save Rick (Lincoln) from the hospital in which he was comatose.

Back in the present, Dr Edwin Jenner (Emmerich) officially introduces himself to the survivors after stipulating that they may only stay if they all submit to a blood test. No-one disagrees.

The group of survivors enjoy their first meal in days. At this dinner, Shane insists Dr Jenner explain what happened to all of the other scientists at the CDC. Jenner tells the group that, when things got bad, a lot of people left to be with their families. When things got worse, the rest bolted or killed themselves leaving only Jenner behind to continue his work.

A drunk Shane approaches Lori (Callies) confronting her about the way she has treated him since Rick’s return and trying to explain why he told her Rick was dead. This drunken tirade culminates in Shane attempting to rape Lori, but Lori fends him off and he leaves.

The next day Jenner reveals his research: a recording of a brain from ‘test subject 19’ or TS-19. This subject had been infected by a zombie so allowed themselves to be studied in the hopes the research would contribute to a cure.

While watching research footage, the group notice a countdown happening and Jenner informs them that the centre is running out of generator fuel. Once the centre powers down it will decontaminate with an explosion second only to nuclear.

Jenner locks the survivors in, arguing that it will be a painless death as opposed to the one they suffer in the outside world. After discovering TS-19 was Jenner’s wife, Rick manages to talk him into letting the survivors out. However, Jacqui (Prescott) has been convinced by Jenner’s speech and stays with him to die a quick and allegedly painless death.

The season ends with the caravan turning around and driving away from the CDC.

For only being six episodes long, season one of The Walking Dead has been one of the most thrilling shows I have seen in a long time.

Overall, many of the characters who have died this season were ‘nothing characters’ and just seemed expendable from the get go. It could only have been more obvious if they wore red shirts and their names were never revealed. However, the characters that have survived so far all have strong personalities that are very different from each other.

The most interesting character I have found so far is Daryl Dixon. While Rick Grimes is the quintessential good guy and Shane Walsh gradually unravels, Daryl remains consistently ambiguous. Do you always agree with his opinions? No. But that only makes the character more interesting. I can’t wait to see what lies in store for this character.