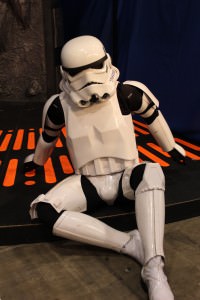 For those who haven’t seen the (viral) media coverage of a stormtrooper walking across Australia to raise money for Starlight, his name is Jacob French. He seems like a shy young man who had an idea, wanted to make people laugh and wanted to do something good. Recently Jacob took a break from his walk across Australia, where he has (at the time of writing this article) got to the border between Western Australia and South Australia. Jacob hitch-hiked with truckies to Melbourne to attend Armageddon, which is where Nalini Haynes of Dark Matter tracked him down, hiding amongst all the other stormtroopers.

You’re walking across Australia – [laughing at Jacob who was playing the pirate, putting his mask over one eye so I could only see the other eye] – how is that going?

Really well. I’ve raised over $30,000 and I’ve only really crossed WA (Western Australia) so I’m only a third of the way and I’m over half the way to the goal I wanted to raise money for, so it’s really fantastic.

I heard that it took you three months to walk as far as you’d planned to walk in six weeks. Are you going to have enough time to get to Sydney still?

I didn’t plan for the number of people who would plan to stop and get photos. The response has been massive. So I’ve sort of re-budgeted for that, so I’ve allowed myself a bit of extra time each day. And I’m also capable of doing really twice the distance I was able to when I first started.

What is your record for a distance walk in a day?

It stands at 80 kilometres and it took me 18 hours to do.

So you did that marathon that you were talking about doing.

How did you cope the next day?

I slept for about two days.

So what’s an average day now?

It looks like you’ve been having this amazing journey. There are photos of you being King of the World,
and up a tree, and riding a horse and stuff. What’s that been like?

It’s good. It’s what the trek is all about. There is no real massive plan that I have. Any plan that I’ve tried to make has failed anyway. It’s all these little moments that just happened that have made it so fun.

How did you decide that you were going to support Starlight specifically with your journey?

We’d done events for Starlight in the past. We’d gone along to some of their fundraisers, and they were some of the first events that I did when I joined the 501st four years ago. So we’ve been involved with them fairly heavily and had the chance to go up and visit the kids in hospital and cheer them up. So we’ve worked with them before, and I really like and admire their core motto, which is: if you can laugh, you can get through just about anything. That’s a really big part of what the 501st is. We just like making people laugh and giving people a bit of a chuckle.  If you can help people out by doing so, the more the merrier, you know.

What has the support been like? Everyone has been stopping, taking photos and talking. What has that been like for you?

It’s been really crazy. Some days it takes all day just to get anywhere, just because everyone is stopping every five minutes. Which is great, it’s what the trek is all about, but I’m still blown away by it. A lot of people love it, they think it’s really cool.

How many pairs of shoes have you gone through so far?

I’m on my third pair so far. They’re lasting about 600 k’s (kilometres) each pair.

That’s a long walk. Have you got any big events planned? I mean, you’ve been here for Armageddon now. Any big events for the next few months?

None specifically, but I’m going to do what I can. We’d love to The Brunswick Harley Owners Club with Troopertrek, photo courtesy of the club organise some events but it comes back to funding; it’s all selffunded at this point. And time. Where I am at any given time hasn’t been locked in so far. We’ll do the best we can to make
events and give people a laugh.

I noticed on your facebook page the other day you were saying you’d really love to get to Melbourne. Did someone come and pick you up and give you a lift?

I ended up getting a lift with a truck driver. So I sort of hitchhiked my way across to Melbourne. A bit of a first for me, in stormtrooper armour.

Are you going to hitch-hike back?

Is there anything you’d like to say to the people who have been following you?

Yes. Thanks for following me. It’s been amazing. Like I said, when I started, I never expected any where near this amount of support; it’s been fantastic, so thanks. And comment, let me know what you think, give me ideas or suggestions if you’ve got them because I’d love to hear them.

I’d prefer to do something else. It was a good enough job to get me the money for this but it’s not something I’d like to go back to.

I sort of haven’t thought about it too much. There’s a lot of things I love doing and a few things I’m good at doing, so I’ll see where it takes me.

Well I’ll be really interested in following you and finding out what you’re doing in the future. I’d love to check back with you later.