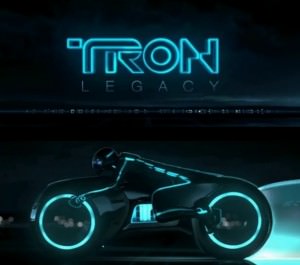 a review by Liam Merrick

I didn’t grow up with Tron. In fact, I saw the original 1982 movie only a couple of nights before seeing Legacy. So unlike some viewers, I had no chance of a childhood/teenage favorite being ‘ruined’. And while I’m on the topic of the original film – Tron: Legacy is a sequel, set some twenty odd years after the first. You might be able to jump right into Legacy but you shouldn’t. Sure Tron is a little dated, but it’s definitely worth watching. So go out and hire, buy or download Tron and enjoy.

Now it’s time for Legacy. Kevin Flynn (Jeff Bridges) has been missing for about 15 years. His son, Sam Flynn (Garrett Hedlund) is in his twenties. Unlike his father, he has no desire to run a software company, instead, he just bums around. But one thing leads to another and Sam is accidentally transported into a digital world called The Grid (Sound familiar? It should. Also, who doesn’t check for a laser behind them when using an unfamiliar computer!?) So Sam is transported into The Grid. But it’s changed. Gone are the gray tones of the original. Instead, black is the colour of choice, and I’ve got to say, it’s all the sleeker for it. That’s probably also how I would describe the visuals. Impressive is another word I’d use. But back to the story. Sam finds out that his father is trapped in The Grid and that he must fight in gladiatorial combat, as well as the classic light cycle race to rescue him. From here the story kicks into gear. However, it’s really just a standard Hollywood heroes journey. So in terms of plot, there isn’t too much that will surprise you. Which is disappointing, but there’s still plenty to enjoy about the movie.

There are four very enjoyable things in fact. The first I’ve already mentioned; the visuals are amazing. Secondly, the film also features two great performances, by Jeff Bridges (as Flynn, I’ll get to Clu later) and by Michael Sheen. Sheen’s really only a one scene cameo, but that one scene was the highlight of the film for me. It’s about halfway through the film and the action and plot come to a head. The scene comes after a great build up and it’s here that we also hear the best song of Daft Punk’s score ‘Derezzed’. This score is the third thing I enjoyed. Daft Punk manage to mix electronica and orchestral, to provide the movie with (dare I say it) a bit of soul. Now that may be going a little bit far, but it did liven up the film. The pacing was the final thing that I liked about the film. There were some great buildup’s to action scenes and then we’re given a brief break before the tension builds again.

However, there were also a number of things that really stopped this from being a really great film. As I mentioned earlier, the story is rather weak. But there were other critical factors. The first was Garrett Hedlund’s performance as Sam Flynn. Sure, this guy might be suitable for an action film (I guess…), but when you’re playing opposite Jeff Bridges, you really have to lift your game. Hedlund didn’t. The other thing I didn’t like was Clu. Clu is a program created by Kevin Flynn just after the original film to help make the perfect grid. He’s also the villain of the piece. Now, in Tron, when a program is made, it takes on the likeness of it’s creator. So Clu is meant to look like a younger Jeff Bridges. Now, if any of you saw the recent Jim Carrey animated movie, A Christmas Carol which used motion capture, you’d know what Clu looks like; not human, I’m afraid. Also when he’s not standing in shadow, he looks fake; which takes me out of the film.
Tron: Legacy isn’t a great film, but it’s certainly worth watching. Maybe not worth $22 at the cinema, but I think you might enjoy it.