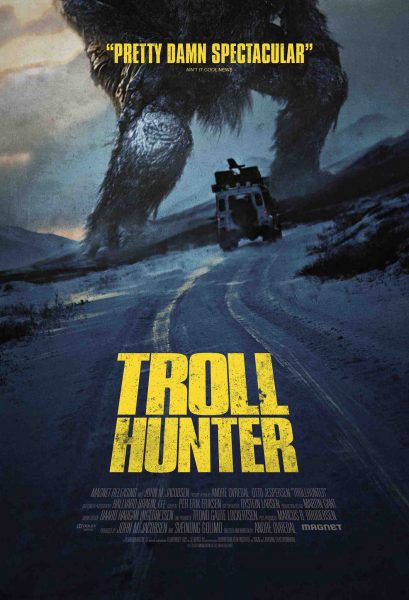 Troll Hunter or Trolljegeren is a Norwegian horror/comedy mockumentary movie about three college students, Thomas, Johanna and Kalle, who pursue Hans in the belief that he is a bear poacher. The students hope to interview Hans or make a documentary around Hans’ bear poaching. However, Hans is not a bear poacher; Hans is a troll hunter. A government conspiracy has kept the existence of trolls a secret, to the point of placing dead bears at sites where animals and humans have been killed by trolls. Hans works for the government by killing the troublesome trolls before calling in the government agents who place the bear. At first Hans tells the students to clear off, but after they follow him, placing themselves in extreme danger, he reconsiders. Together the four travel around looking for trolls. Apparently trolls don’t like Christians, which fact was used to build tension throughout the movie.

Troll hunter is in the style of many wild-life documentaries, with Hans in the role of the wild-life expert who risks his life in service, and the college students in the role of film-makers. The camera man is rarely seen although he is a character in the movie. Johanna does sound, usually walking around with a large microphone. The third in the group appeared to be the director and Johanna’s boyfriend. The students were fairly unlikeable, although I’m not sure how much that is a result of the dubbed voices and how much was their characters: they were arrogant, stupid (who goes into a blasting zone?) and demanding. The camera guy seemed more nervous and respectful, but he had less impact on story development than those in front of the camera. Hans was a mysterious character whose story began to unfold somewhat.

True to the story, the camera is hand-held, moving, shaking and sometimes aimed at the ground or a tree during times of stress to place greater emphasis and suspense via the sound track. This is mostly successful, although I found that, at times, it was distracting – too much camera shake made images confusing. When the camera ‘broke’, it still functioned but with pieces of glass over the image. This was overkill in my opinion as, with a broken camera lens, you wouldn’t have usable images. A replacement was found, so the movie continues without this distraction.

Fairytales were referenced throughout the movie whilst also being dismissed as stories. The implication is that, although the government has covered up the reality of co-existing with trolls, there is some kind of racial memory that is partially consistent with the ‘facts’ of troll hunting. My favourite aspect of the fairytale versus reality was a visual gag involving goats and a bridge.

The trolls were very well thought out. There were several species of troll, as varied as species of lizard. Each had its own environment and habits, but were visually different from one another. The troll aspect of the movie was very detailed, so the troll hunter came across quite convincingly as a real-life hunter who hunts and kills rogue lions, for example. The trolls themselves were muppets. I thought the first troll, with three heads, was way overdone, but none of the other trolls were anything similar. The mountain trolls reminded me strongly of the Mystics in Dark Crystal. Overall the trolls were good in their detail, visual and theoretical, and how this impacted on the story.

I watched the dubbed version of Troll hunter instead of the original language version with subtitles. I would strongly recommend that people watch the original language version – the dubbing was not great. The voices lacked authenticity and the voice-acting lets the story down a bit. The dubbing also had the feel of being written by someone who was familiar with formal English but not colloquial English: it was a bit stilted and artificial in a few places. The advantage of watching the movie the first time through using dubbing was that total focus could be on the visuals, especially the trolls.

I expected a certain climactic event for most of the movie (if you pay close attention you’ll pick up clues); where Troll hunter surprised me was that it didn’t devolve into a schlock horror. There are horror themes but Troll hunter is not any stronger in horror than Angel or Buffy, and not as strong as the highest-classified Dark Angel episode. The story and the comedy are as much a part of the movie as the horror. Some critics have commented that Troll hunter is in the style of Cloverfield due to its found-footage hand-cam style, but I watched Cloverfield and feel any comparison between Troll hunter and Cloverfield is unfair to Troll hunter. I enjoyed Troll hunter whereas I wish I hadn’t bothered to see Cloverfield: I thought it was dreadful. In fact, this is the first time ever I am even vaguely pleased I saw Cloverfield – but only so I can comment on the fact that Troll hunter is far superior!

Overall, Troll hunter was a good movie that benefited from not being in the Hollywood mould. It’s not your fast-paced action/thriller with lots of bangs and flashes – this is a wild-life horror/comedy mockumentary. The plot had a few mild twists along the way although nothing that betrayed its ‘documentary’ style. There was tension build-up as I expected a certain event, but the follow-through after this event was handled surprisingly. If you’re sick of Hollywood stereotypes and want something in a different vein with more intelligence then this is the movie for you.