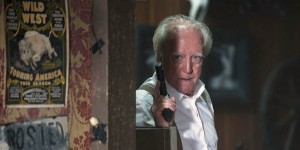 Lori (Callies) awakens after her car accident to find a walker trying to chew his way through the windscreen to attack to her. She fights the walker off and another that appears as well. Shane (Bernthal) finds Lori and lies to get her to give up the search for Rick and return to the farm.

Daryl separates himself further from the group. Carol tries to stop him, but only pushes him away more.

Rick, Glenn and Hershel save Randall (Zegen), the boy who had been impaled on the fence, at great personal risk. They return to the farm with him to save his leg and his life.

The episode ends with Lori telling Rick all the things Shane has been doing to undermine him and take his family.

There isn’t a lot that can be said about this episode. It seemed very much the merry-go-round again and the plot only really advances enough to get everyone back together again with one more person tacked on for good measure and conflict.

Good episode, but nothing groundbreaking.