Last but by no means least, is the Triantiwontigongolope Award for representation of disability with hope and joy.

The background to this award: when I was about 4, my father bought me a book of poetry. One of the poems was CJ Dennis’s Triantiwontigongolope. As it’s now out of copyright, I’ve included it at the bottom of this post. When my father wanted me to read it to him, I argued because it was too hard. I wanted to read something easier, so I said it was silly. My father told me to ponder what that world – a world where the trees and grass were purple, and the sky was bottle green – would be like. I asked if I could be normal there. He said yes. I’ve loved speculative fiction ever since, because there’s the hope of being accepted in a diverse world.

Why I chose this book

A Lifetime of Impossible Days is a story full of hope, working through adversity towards healing and acceptance. The central characters have PTSD and Silver Willa also has Alzheimer’s. Through re-parenting herself – a real counselling technique with added magical realism making that re-parenting more real – the Willas find healing and experience joy despite their trauma.

This story is relatable in many ways, especially in the knowledge that, according to research, at least 1 in 9 girls experiences childhood sexual assault. Figures for all kinds of abuse are higher for disabled people and especially disabled women and girls.

Tabitha Bird has taken a difficult subject and written sensitively with no depiction of sexual assault although the reader knows it occurred. Her three central characters experience the fallout from that and other traumas and find healing. All the way through reading this novel, I was surprised at how anyone could take such a dark subject and write such joy and imbue me with hope. 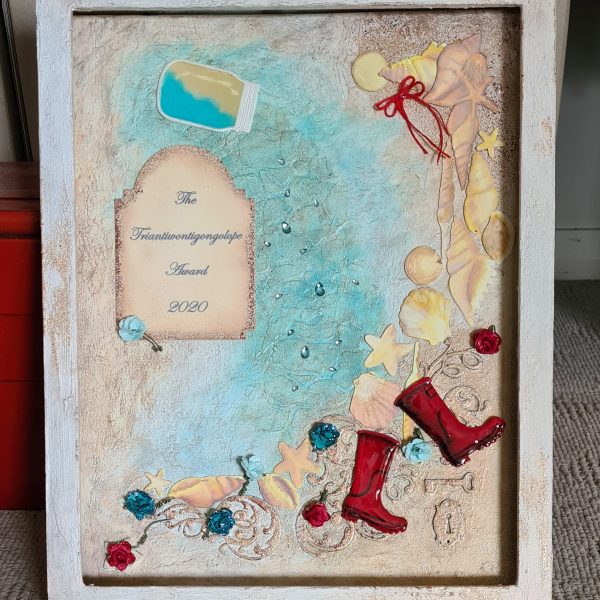 The making of this award

If you’ve been following these posts, you will know that I used texture medium on every frame then painted EVERY frame and EVERY backing board BLACK. EVEN THIS ONE. Sigh. Two coats. Double sigh.

Then, once I started really working on this award, I TURNED AROUND AND PAINTED IT WHITE. THREE COATS TO GET PAST THE BLACK. ARGH.

For texture I used a “pool” or “water” stencil. The only problem is, using texture paste on it kinda inverted it. But oh well. Fingers crossed it works. As usual, I ran it in a diagonal down the page.

The scrollwork is layers of paper die cut and glued together. But the lock and key are purchased chipboard cuts.

I die cut layers of paper for the mason jar then used versamark ink and silver pearl embossing powder followed by my sickly, dying, heat gun to get that glassy look. The interior of the jar is just one of the layers of Neena Solar White 80lb cardstock with inking for the “sandy” top and Distress Glaze for the water. Cue heat gun. It’s sputtering on. It’s not well.

Also, I used a smidge of Versamark and embossing powder with more than a smidge of heat gun to get the light to reflect off the jar “side”. It faded a bit when I filled in the jar with Glossy Accents to make it look more jar-like.

I painted the backboard using various Distress Oxide Inks. Acrylic paint might have been better but my paints are somewhat old and neglected. They need some love before I dare to use them on an important project.

Also, at this stage, I used the metallic waxes to color the award and the frame. I don’t have enough colors to satisfy my whim for color here (next year I’ll buy a wider variety of colors). So, in the end, the frame looked a bit as though it had been whitewashed or painted with chalk paint. Or so I think. It does have color but I didn’t want it to end up a brassy kitschy thing, so I went rather light on.

Sand in my shoes

It seemed something was lacking. I mean, where you have an ocean and shells and stuff, you need sand, right?

Ask not for whom the shells toll…

I bought a shell die and stamp set earlier this year. Unfortunately, the die showed up but not the stamp set. I complained. They *said* they’d send the stamp set but didn’t. So I was kinda stuck. My solution: die cut and glue together layers of watercolor paper and (gulp) paint the shells completely by hand. It’s been a while since I did much painting and my eyesight is deteriorating so this was me going out on a limb. I figure haters gonna hate but others might like it.

I deliberately made the shells faint because, at Shelly Point when I was a kid, the shells might have had more contrast than this but, with SO MANY SHELLS, the visual picture was kind of like “sand”. Very crunchy, difficult to walk on in bare feet, but kinda like sand VISUALLY.

Red gumboots were a must because Supergumboots Willa’s FAVOURITE gumboots were red. So I had to find a way to make red boots work. I used a color wheel and tried – so very hard – to use complementary colors working in the teal of Tabitha’s book cover, the color of the sand and shells, and the gumboots.

The gumboots could NOT be the only red items on the award because that’d look odd.

Although I don’t recall Supergumboots Willa losing a hair ribbon, I thought a lost red hair ribbon could symbolize loss of innocence. Meanwhile, the gumboots are joyously tromping through the water and shells. And roses, like in Bette Midler’s song, symbolize love. While, hopefully, bringing the color scheme into balance.

Because I had such a definite idea of what I wanted for this award, I did most of the layout and gluing. However, hubby came in to help fit the shells on the right between the ones at the top and bottom.

He glued the roses after I’d molded and glitter-glued them. We also had a conference about their layout. I mostly liked what he’d done but we played with them together. (OMG this kind of thing TAKES SO MUCH TIME!)

Also, I played with my water droplet crystals, trying to get some kind of layout that worked, while talking to my brother-in-law. (He was visiting up from rural Victoria after Victorians were released in recognition of good behavior and GETTING COVID19 UNDER CONTROL, YAY!)

But gluing the wretched things was something I was only too relieved to hand over to hubby.

If you’ve read this far, you’re a legend. This is the final award. Also, this is my favorite award. I’ve copied the poem for which this award is named below. Please enjoy!

It lives on weeds and wattle-gum, and has a funny face;
Its appetite is hearty, and its manners a disgrace.
When first you come upon it, it will give you quite a scare,
But when you look for it again, you find it isn’t there.
And unless you call it softly it will stay away and mope.
So try:
Tri-
Tri-anti-wonti-
Triantiwontigongolope.

It trembles if you tickle it or tread upon its toes;
It is not an early riser, but it has a snubbish nose.
If you snear at it, or scold it, it will scuttle off in shame,
But it purrs and purrs quite proudly if you call it by its name,
And offer it some sandwiches of sealing-wax and soap.
So try:
Tri-
Tri-anti-wonti-
Triantiwontigongolope .

But of course you haven’t seen it; and I truthfully confess
That I haven’t seen it either, and I don’t know its address.
For there isn’t such an insect, though there really might have been
If the trees and grass were purple, and the sky was bottle green.
It’s just a little joke of mine, which you’ll forgive, I hope.
Oh, try!
Tri-
Tri-anti-wonti-
Triantiwontigongolope.